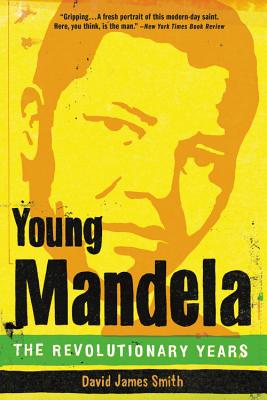 Nelson Mandela is well-known throughout the world as a heroic leader who symbolizes freedom and moral authority. He is fixed in the public mind as the world's elder statesman -- the gray-haired man with a kindly smile who spent 27 years in prison before becoming the first black president in South Africa.

But Nelson Mandela was not always elderly or benign. And, in Young Mandela, award-winning journalist and author David James Smith takes us deep into the heart of racist South Africa to paint a portrait of the Mandela that many have forgotten: the committed revolutionary who left his family behind to live on the run, adopting false names and disguises and organizing the first strikes to overthrow the apartheid state. Young Mandela lifts the curtain on an icon's first steps to greatness.

David James Smith was born in south London in 1956 and has been a journalist all of his work life. He wrote for the monthly magazine Esquire before joining the Sunday Times Magazine. He is the author of The Sleep of Reason, All About Jill, and Supper with the Crippens. He lives in Lewes, East Sussex.

"David James Smith's Young Mandela takes up the tale of Mandela's rise within the A.N.C.in gripping fashion...and offers a fresh portrait of this modern-day saint...Here, you think, is the man."—J.M. Ledgard, New York Times Book Review

"Young Mandela presents a vivid picture of South Africa under apartheid...Mandela's flaws make him more fascinating, and his movement's ambiguities and conflicts map the crooked, hard-fought road that every freedom struggle must travel."—Kate Tuttle, Boston Globe

"Young Mandela provides a fascinating take on the South African freedom fighter's rise to power, including his fraught relationship with his children and his courtship of Winnie."—Vogue

"Smith succeeds in bringing Nelson Mandela to life, wading in where other biographers have feared to tread to provide much new information and genuine insight."
—Stephen Robinson, Sunday Times

"Illuminating...Mandela is portrayed as a flawed, complex man...but it is this rounded view of the man that gives the book its humanity."
—Peter Howard, Newark Star-Ledger
or
Not Currently Available for Direct Purchase
Copyright © 2020 American Booksellers Association