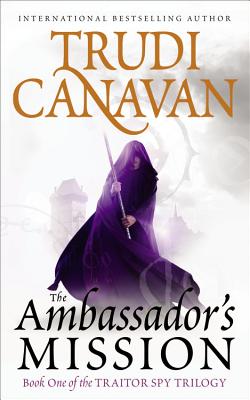 Sonea, a Black Magician of Kyralia, is horrified when her son, Lorkin, volunteers to assist the new Guild Ambassador to Sachaka. When word comes that Lorkin has gone missing, Sonea is desperate to find him, but if she leaves the city she will be exiled forever. And besides, an old friend is in need of her help.

Most of her friend's family has been murdered -- the latest in a long line of assassinations to plague the leading Thieves of the city. There has always been rivalry, but now the Thieves are waging a deadly underworld war, and it appears they have been doing so with magical assistance.

With over one million copies in print, Trudi Canavan has taken the fantasy world by storm. If you haven't done so already, The Ambassador's Mission is the perfect opportunity to discover the magic of Trudi Canavan.

Trudi Canavan published her first story in 1999 and it received an Aurealis Award for Best Fantasy Short Story. Her debut series, The Black Magician Trilogy, made her an international success and five of her novels have been Sunday Times bestsellers in the UK. Trudi Canavan lives with her partner in Melbourne, Australia, and spends her time writing, painting and weaving.
or
Not Currently Available for Direct Purchase
Copyright © 2020 American Booksellers Association