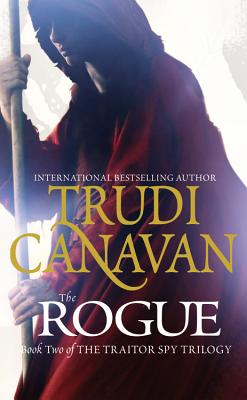 The Rogue (The Traitor Spy Trilogy #2)

Discover the magic of Trudi Canavan with her brand new novel in the Traitor Spy Trilogy. . .

Living among the Sachakan rebels, Lorkin does his best to learn about their unique magic. But the Traitors are reluctant to trade their secrets for the Healing they so desperately want.

Meanwhile, Sonea searches for the rogue, knowing that Cery cannot avoid assassination forever -- -- but the rogue's influence over the city's underworld, however, is far greater than she feared.

And in the University, two female novices are about to remind the Guild that sometimes their greatest enemy is found within. . .

Praise For The Rogue (The Traitor Spy Trilogy #2)…

"Some excellent reading to be had." --- Robert N. Stephenson on The Novice

"This captivating tale has already been hailed by critics as a 'must for lovers of good fantasy'." --- Marie Claire (Australia) on The Magicians' Guild—-

Trudi Canavan published her first story in 1999 and it received an Aurealis Award for Best Fantasy Short Story. Her debut series, The Black Magician Trilogy, made her an international success and five of her novels have been Sunday Times bestsellers in the UK. Trudi Canavan lives with her partner in Melbourne, Australia, and spends her time writing, painting and weaving.
Loading...
or support indie stores by buying on