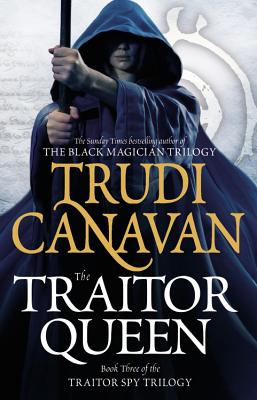 Discover the magic of Trudi Canavan with her brand new novel in the Traitor Spy trilogy...

Events are building to a climax in Sachaka as Lorkin returns from his exile with the Traitor rebels. The Traitor Queen has given Lorkin the huge task of brokering an alliance between his people and the Traitors. Lorkin has also had to become a feared black magician in order to harness the power of an entirely new kind of gemstone magic. This knowledge could transform the Guild of Magicians - or make Lorkin an outcast forever.

The Traitor Spy trilogy, which began with The Ambassador's Mission and The Rogue, is the new series set in the world of the international bestselling Black Magician trilogy.

Trudi Canavan published her first story in 1999 and it received an Aurealis Award for Best Fantasy Short Story. Her debut series, The Black Magician Trilogy, made her an international success and her last five novels have been Sunday Times bestsellers in the UK. Trudi Canavan lives with her partner in Melbourne, Australia, and spends her time writing, painting and weaving.

"Her [Canavan's] magical world is brilliantly conceived."—RT Book Reviews on The Magician's Apprentice

"Some excellent reading to be had."—Robert N. Stephenson on The Novice

"This captivating tale has already been hailed by critics as a 'must for lovers of good fantasy'."—Marie Claire (Australia) on The Magicians' Guild
or
Not Currently Available for Direct Purchase
Copyright © 2020 American Booksellers Association