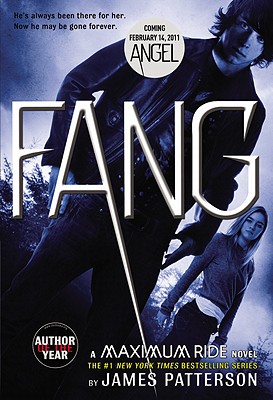 Being a kid with wings -- constantly on the run -- has never been easy, and Max and her flock are more tense than ever.
Angel says that Fang will be the first to die, and Angel is never wrong. Maximum Ride is used to living desperately on the run from evil forces sabotaging her quest to save the world-but nothing has ever come as close to destroying her as this horrifying prophetic message. Fang is Max's best friend, her soul mate, her partner in the leadership of her flock of winged children. A life without Fang is a life unimaginable.
When a newly created winged boy, the magnificent Dylan, is introduced into the flock, their world is upended yet again. Raised in a lab like the others, Dylan exists for only one reason: he was designed to be Max's perfect other half. Thus unfolds a battle of perfection versus passion that terrifies, twists, and turns . . . and meanwhile, the apocalypse is coming.

Praise for Fang:
"Patterson's quick-paced tale of adventure, betrayal, and redemption is full of vibrant and memorable characters. It truly has bite."—School Library Journal

"This will excite legions of fans waiting for this installment in the flock's story."
—Booklist