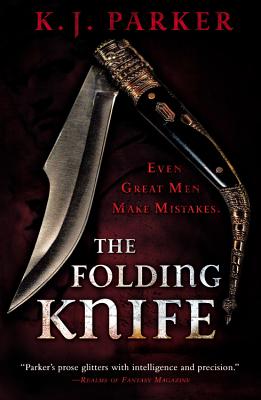 A new stand-alone novel from the acclaimed author of the Engineer Trilogy and The Company.

Basso the Magnificent. Basso the Great. Basso the Wise. The First Citizen of the Vesani Republic is an extraordinary man.

He is ruthless, cunning, and above all, lucky. He brings wealth, power and prestige to his people. But with power comes unwanted attention, and Basso must defend his nation and himself from threats foreign and domestic. In a lifetime of crucial decisions, he's only ever made one mistake.

One mistake, though, can be enough.

Praise For The Folding Knife…

"I have reviewed books before that I thought might someday be found to have achieved greatness.... But I am trying to be precise in my use of the word when I tell you that K.J. Parker is writing work after work that demands to be placed in that category. " --- Orson Scott Card on The Engineer trilogy

"It's a dark, bleak and fiercely intelligent portrait of the human condition..." --- SFX on The Company

"Imagine Lost meets The Italian Job...a masterfully planned and executed book, one that builds on ever-revealing characterization and back-story, leading slowly yet inexorably to its final conclusion." --- SFF World on The Company