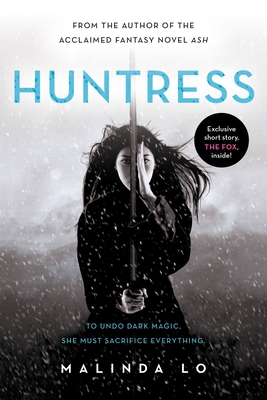 Nature is out of balance in the human kingdom. The sun hasn't shone in years, and crops are failing. Worse yet, strange and hostile creatures have begun to appear. And the people's survival hangs in the balance.

To solve the crisis, the oracle stones are cast, and Kaede and Taisin, two seventeen-year-old girls, are picked to go on a dangerous and unheard-of journey to Tanlili, the city of the Fairy Queen. Taisin is a sage, thrumming with magic, and Kaede is of the earth, without a speck of the otherworldly. And yet the two girls' destinies are drawn together during the mission. As members of their party succumb to unearthly attacks and fairy tricks, the two come to rely on each other and even begin to fall in love. But the Kingdom needs only one huntress to save it, and what it takes could tear Kaede and Taisin apart forever.

The exciting adventure prequel to Malinda Lo's highly acclaimed novel Ash is overflowing with lush Chinese influences and details inspired by the I Ching, and is filled with action and romance.

* "Lo's storytelling and prose are masterful, and her protagonists will fascinate, particularly Taisin and her relationship to death and its accompanying rituals, her visions, and the way she can occupy another's mind."—Publishers Weekly, starred review

"Heartbreaking sensuality...blossoms between the female leads. Beyond romance, however, stunning action sequences abound, including one literal cliffhanger and a breathtaking confrontation with the villain. Fans who found themselves entranced by Lo's previous work will be pleased to know that the magic has returned to the Wood."—Bulletin for the Center on Children's Books