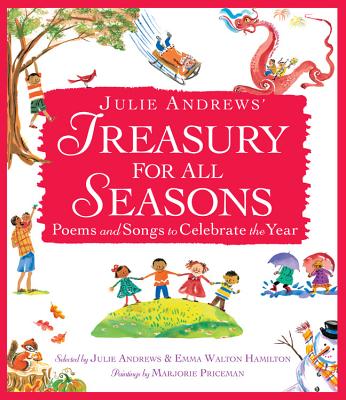 Poems and Songs to Celebrate the Year

A vast array of poems old and new joyously celebrates each special day of the year, telling of New Year's resolutions, Valentine's Day love, Easter parades, Fourth of July fireworks, and more. From the cold of winter to the new hope of spring, the brisk fall to the steamy summer, Caldecott Honor illustrator Marjorie Priceman's vibrant watercolor paintings ring in every month of the year, bringing each season to joyful life. Featuring verse from favorites like Walt Whitman, Jack Prelutsky, and Langston Hughes and poetic lyrics from the likes of Cole Porter and Oscar Hammerstein, plus heartfelt introductions by Julie Andrews describing favorite family holiday moments, this is the perfect collection for families to share together.

Praise For Julie Andrews' Treasury for All Seasons: Poems and Songs to Celebrate the Year…

Praise for The Very Fairy Princess:
"[Geraldine]
lets kids know it's not necessary to be prim and proper to be a 'real'
princess; princesses who just want to have fun will find plenty of that
here." - Booklist
"The mother-daughter team successfully
demonstrates an understanding of that magical stage of childhood in
which determination, desire and dreams can transform reality." - Kirkus
"Geraldine radiates noblesse oblige, heedless energy, and a sense of destiny-she's Eloise crossed with Hillary Clinton." - PW

Praise for Julie Andrews' Collection of Poems, Songs, and Lullabies:
New York Times Bestseller
"This
is a warmly sentimental collection, leavened with humor and poignancy,
...educators and librarians will also embrace it for its sincere
advocacy of reading aloud." - SLJ
"Julie Andrews and her daughter's selection of material for children... is bound to become a favorite." - PW