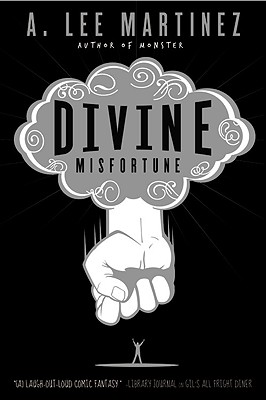 “Not since Richard Condon's Money is Love has anyone had so much fun with the interactions of gods and humans. As their human followers get caught up in the petty squabbles of ancient deities, A. Lee Martinez is able to joyfully skewer many conventions of modern society. This is superb satire filled with pertinent observation.”
— Bill Cusumano, Nicola's Books, Ann Arbor, MI
View the List

DIVINE MISFORTUNE is a story of gods and mortals---in worship, in love, and at parties.

Teri and Phil had never needed their own personal god. But when Phil is passed up for a promotion - again-it's time to take matters into their own hands. And look online.

Choosing a god isn't as simple as you would think. There are too many choices; and they often have very hefty prices for their eternal devotion: blood, money, sacrifices, and vows of chastity. But then they found Luka, raccoon god of prosperity. All he wants is a small cut of their good fortune.

Oh -- and can he crash on their couch for a few days?

Throw in a heartbroken love goddess and an ancient deity bent on revenge and not even the gods can save Teri and Phil.

A. Lee Martinez was born in El Paso, Texas. At the age of eighteen, for no apparent reason, he started writing novels. Thirteen short years (and a little over a dozen manuscripts) later, his first novel, Gil's All Fright Diner, was published. His hobbies include juggling, games of all sorts, and astral projecting. Also, he likes to sing along with the radio when he's in the car by himself. For more information on the author, check out www.aleemartinez.com
or
Not Currently Available for Direct Purchase
Copyright © 2020 American Booksellers Association