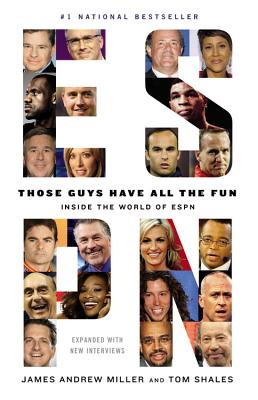 Those Guys Have All the Fun

Inside the World of ESPN

In the exclusive behind the scenes look, sports fans can unlock the fascinating history of the channel that changed the way people watch and interact with their favorite teams.
It began, in 1979, as a mad idea of starting a cable channel to televise local sporting events throughout the state of Connecticut. Today, ESPN is arguably the most successful network in modern television history, spanning eight channels in the Unites States and around the world. But the inside story of its rise has never been fully told-until now.

Drawing upon over 500 interviews with the greatest names in ESPN's history and an All-Star collection of some of the world's finest athletes, bestselling authors James Miller and Tom Shales take us behind the cameras. Now, in their own words, the men and women who made ESPN great reveal the secrets behind its success-as well as the many scandals, rivalries, off-screen battles and triumphs that have accompanied that ascent. From the unknown producers and business visionaries to the most famous faces on television, it's all here.

James Andrew Miller is the author of Running in Place: Inside the Senate and Live from New York. He has also written for the New York Times, Life, the Washington Post and Newsweek. His various positions in television include Senior Executive Producer of "Anderson Cooper 360" and Executive VP of Original Programming at USA Network. He lives in Bucks County, PA.

Tom Shales won his Pultizer Prize for television criticism in the Washington Post. He is the author of On the Air!, Legends, and Live from New York, and has written for publications such as Esquire, Playboy, Life, and Interview, among others. He lives in McLean, Virgina.
Loading...
or
Not Currently Available for Direct Purchase