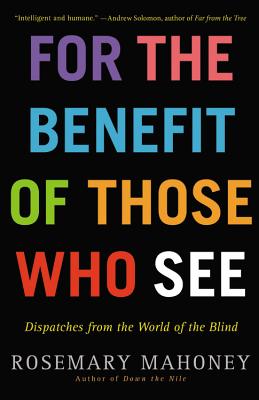 For the Benefit of Those Who See

Dispatches from the World of the Blind

In the tradition of Oliver Sacks's The Island of the Colorblind, Rosemary Mahoney tells the story of Braille Without Borders, the first school for the blind in Tibet, and of Sabriye Tenberken, the remarkable blind woman who founded the school.

Fascinated and impressed by what she learned from the blind children of Tibet, Mahoney was moved to investigate further the cultural history of blindness. As part of her research, she spent three months teaching at Tenberken's international training center for blind adults in Kerala, India, an experience that reveals both the shocking oppression endured by the world's blind, as well as their great resilience, integrity, ingenuity, and strength.

By living among the blind, Rosemary Mahoney enables us to see them in fascinating close up, revealing their particular "quality of ease that seems to broadcast a fundamental connection to the world." Having read For the Benefit of Those Who See, you will never see the world in quite the same way again.

"In this intelligent and humane book, Rosemary Mahoney writes of people who are blind . . . She reports on their courage and gives voice, time and again, to their miraculous dignity." -- Andrew Solomon, author of Far From the Tree

Praise For For the Benefit of Those Who See: Dispatches from the World of the Blind…

"Rosemary Mahoney is one of a handful of nonfiction writers so original and so surprising that I look forward to each new book with an excitement bordering on impatience. What makes For the Benefit of Those Who See especially absorbing is that it turns on Mahoney's greatest strength: her idiosyncratic and unblinking eye. As it explores the world of the blind, this provocative and revelatory work teaches us a great deal about what it means to see. And when I finished this book, I returned to the world feeling that all my senses had been sharpened."-George Howe Colt, author of The Big House (finalist for The National Book Award in nonfiction) and Brothers—-

"This joyful, thoughtful book took me on an emotional journey and introduced me to people I'll never forget. With her wonderfully sharp prose and great sense of humor and humanity, Rosemary Mahoney has written a riveting narrative that combines world-class reporting, science, history, and travel writing. For the Benefit of Those Who See has changed forever the way I view my senses, and made me aware of how I do and don't experience the world."-Will Schwalbe, author of The End of Your Life Book Club—-

"In this intelligent and humane book, Rosemary Mahoney writes of people who are blind, many of them from impoverished cultures with little sympathy for their plight. She reports on their courage and gives voice, time and again, to their miraculous dignity."-Andrew Solomon, author of Far From the Tree—-

"A spiritual odyssey into the world of the blind....A beautiful meditation on human nature."-Kirkus (Starred Review)—-

"[a] sparkling exploration...when you finish [Mahoney's] book, walk outside and close your eyes. You just might meet the world again, startling, mysterious, new. - Lynn Darling, Oprah.com—-

"[Mahoney's] research is fascinating, her self-scrutiny refreshing and her prose just the right kind of gorgeous. In this wonderful book we discover along with the author that both sight and its absence come with burdens-and beauties." -Judith Stone, More.com—-

"Riveting...Compulsively readable...Mahoney's beautifully written narrative opens our eyes to the experience of blindness and offers fresh insight into human resilience and the way we view the world." -Henry L. Carrigan Jr., Book Page—-

"For The Benefit of Those Who See is a compassionate realization that seeing isn't the only path to knowing...for the entire book, Mahoney tries to understand sightless reality, and she does it with such blunt tenderness that it lends her writing a shambolic glee. Though she alludes to secondary sources-philosophical considerations of blindness, medical accounts of sight being restored to blind patients-it's her experiences that make Benefit so thoughtful." -Bret McCabe, Johns Hopkins Magazine—-

"A vivid portrait of people and places...It's as if [Mahoney had] turned on the lights in a dark room, revealing how the world appears to those who experience it with their other four senses. The seeing reader will gasp in recognition and understanding, marveling at lives once hidden." -Karen Valby, Entertainment Weekly—-

"Mahoney's vision lends her books an uncanny quality that makes you really feel like you're with her. Weirdly, she says, she had never met a blind person. So Mahoney was apprehensive when she was assigned to write a profile of a woman running the first school for the blind in Tibet. Her experience there served as a prelude for a fuller immersion in the world of the blind, detailed in her new book, For the Benefit of Those Who See." -Arun Rath, NPR.org—-

"Mahoney's curiosity, inspired by her own 'morbid fear' of losing her sight, led her to investigate many aspects of blindness. Particularly fascinating are her accounts of the founding of the Perkins School for the Blind (now in Watertown) and her review of rare cases in which sight was restored-and not entirely welcome." -Suzanne Koven, Boston Globe—-

"Rosemary Mahoney's stunning new [book]...could not have arrived at a better moment. In more ways than ever, we are always seeing, always seen. But at what cost to our other senses? To our humanity? Not only touch, smell, hearing, and taste lose out in our oppressively visual brave new world, but also a sixth sense that students at two schools for the blind Mahoney visits in Tibet and India all seem to possess: the ability to divine character unswayed by appearance or the deceptions of Photoshop. Writing with a scientist's curiosity and insistence on fact-and a novelist's gift for delineating place and character-Mahoney makes their world ours, too." -Megan Marshall, Radcliffe Magazine—-

"Fascinating... [Mahoney's] book's dispatches reveal children and adults with striking resilience and, for the sighted, uncanny abilities...By living and working among the blind, then sending back word of their ambitions and dignity, excellent memories and formidable patience, Mahoney helps readers begin to comprehend that the assumption that blindness holds nothing but loss is quickly corrected by the testimony of the blind themselves."-Seattle Times—-

"A gifted and unflinching observer of the world... Mahoney opens our eyes to sightless reality and discovers how the blind, like the rest of us, have a human need to recognize, to differentiate, and above all, to connect with the people around them."
—-Chicago Tribune, "Editor's Choice"

"Rosemary Mahoney aimed high when she decided to write For the Benefit of Those Who See... We begin to better understand both the vulnerability of blindness-and its enormous possibilities for a rich, if different life... The phrase in the moment takes on new meaning in Mahoney's hands. The moment is-or can be-composed of more than just the things that we see in our visually overwhelming world."—-G. Wayne Miller, Providence Journal

"Mahoney takes readers along on her life-changing experience of immersion in the lives of blind students... Her compassion for her subjects shines through in every word here, making this a fascinating and thoughtful look into the lives of people who experience the world differently than most."
—Colleen Mondor, Booklist (starred review)

"For the Benefit of Those Who See is delightful. Mahoney presents scene after exotic scene with such wit and precision. And the characters, some of whom made me laugh out loud, all shine with their own particularity and quirkiness. I am full of admiration for this unforgettable and important book."—Elizabeth Gitter, author of The Imprisoned Guest: Samuel Howe and Laura Bridgman, the Original Blind Deaf Girl.

"Life without sight seems unimaginably bleak to the sighted. No matter that literate guides from Diderot to Oliver Sacks have confirmed that the blind thrive in their separate reality; the gulf between the light world and the dark one persists. Now a sighted, initially skeptical traveler has provided a multilayered, utterly gripping account of life among the developing world's large blind population... Everyone knows that the loss of one sense strengthens the others, but to understand exactly what that means is not easy. Ms. Mahoney writes with an alchemy that actually inches the reader along to the point of comprehension."
—Abigail Zuger, M.D., New York Times

Rose Tremain's fiction has won the Whitbread Novel of the Year (Music and Silence) and has been shortlisted for the Booker Prize (Restoration) and the Orange Prize (The Colour). Her stories have appeared in the New Yorker and the Paris Review, among other periodicals, and one was selected for The O. Henry Prize Stories 2008. Rose Tremain lives in Norfolk and London with the biographer Richard Holmes.