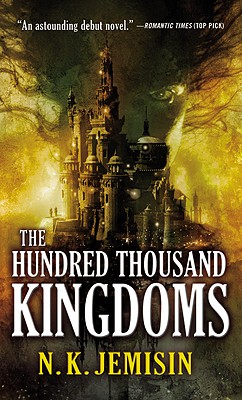 After her mother's mysterious death, a young woman is summoned to the floating city of Sky in order to claim a royal inheritance she never knew existed in the first book in this award-winning fantasy trilogy from the NYT bestselling author of The Fifth Season.
Yeine Darr is an outcast from the barbarian north. But when her mother dies under mysterious circumstances, she is summoned to the majestic city of Sky. There, to her shock, Yeine is named an heiress to the king. But the throne of the Hundred Thousand Kingdoms is not easily won, and Yeine is thrust into a vicious power struggle with cousins she never knew she had. As she fights for her life, she draws ever closer to the secrets of her mother's death and her family's bloody history.

With the fate of the world hanging in the balance, Yeine will learn how perilous it can be when love and hate - and gods and mortals - are bound inseparably together.
The Inheritance Trilogy
The Hundred Thousand Kingdoms
The Broken Kingdoms
The Kingdom of Gods
The Inheritance Trilogy (omnibus edition)
Shades in Shadow: An Inheritance Triptych (e-only short fiction)
The Awakened Kingdom (e-only novella)
For more from N. K. Jemisin, check out:
Dreamblood Duology
The Killing Moon
The Shadowed Sun
The Broken Earth
The Fifth Season
The Obelisk Gate
The Stone Sky
The Great Cities Trilogy
The City We Became

Praise For The Hundred Thousand Kingdoms (The Inheritance Trilogy #1)…

"In the first book of Jemisin's richly detailed Inheritance trilogy, an outcast heroine must find a way to hold her own amid the treachery of her grandfather's court. I've got a special place in my heart for political intrigue, so this book was a delight through and through!"—Cassandra Clare

"THE HUNDRED THOUSAND KINGDOMS is the provocative and exciting debut novel by a writer whose work I hope to be reading for a long time to come."

"In THE HUNDRED THOUSAND KINGDOMS, N.K. Jemisin has created a smart, passionate heroine and an extraordinary world. Marvelous work from a marvelous storyteller!"—Carol Berg, author of Breath and Bone

"Many books are good, some are great, but few are truly important. Add to this last category The Hundred Thousand Kingdoms, N.K. Jemisin's debut novel... This is the must-read fantasy of the year."—Booklist
or
Not Currently Available for Direct Purchase
Copyright © 2020 American Booksellers Association