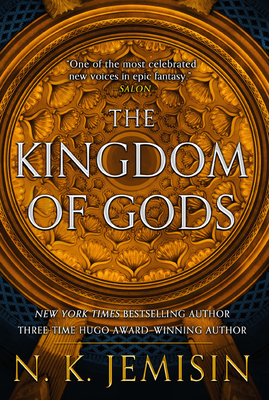 The Kingdom of Gods (The Inheritance Trilogy #3) (Paperback)

Shahar and the godling Sieh must face off against the terrible magic threatening to consume their world in the incredible conclusion to the Inheritance Trilogy, from Hugo award-winning and NYT bestselling author N. K. Jemisin.
For two thousand years the Arameri family has ruled the world by enslaving the very gods that created mortalkind. Now the gods are free, and the Arameri's ruthless grip is slipping. Yet they are all that stands between peace and world-spanning, unending war.

Shahar, last scion of the family, must choose her loyalties. She yearns to trust Sieh, the godling she loves. Yet her duty as Arameri heir is to uphold the family's interests, even if that means using and destroying everyone she cares for.

As long-suppressed rage and terrible new magics consume the world, the Maelstrom -- which even gods fear -- is summoned forth. Shahar and Sieh: mortal and god, lovers and enemies. Can they stand together against the chaos that threatens?

Praise For The Kingdom of Gods (The Inheritance Trilogy #3)…

"In the first book of Jemisin's richly detailed Inheritance trilogy, an outcast heroine must find a way to hold her own amid the treachery of her grandfather's court. I've got a special place in my heart for political intrigue, so this book was a delight through and through!"—Cassandra Clare on The Hundred Thousand Kingdoms
or support indie stores by buying on
Copyright © 2020 American Booksellers Association