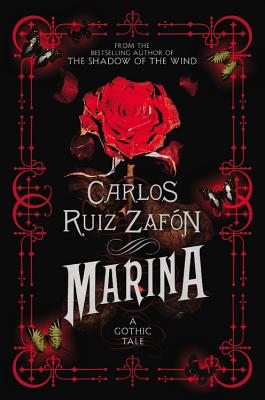 Carlos Ruiz Zafon's haunting gothic mystery, which has long been a cult classic in Spain and is now an international bestseller.
"We all have a secret buried under lock and key in the attic of our soul. This is mine."
Fifteen-year-old Oscar Drai meets the strange Marina while he's exploring an old quarter of Barcelona. She leads Oscar to a cemetery, where they watch a macabre ritual that occurs on the last Sunday of each month. At exactly ten o'clock in the morning, a woman shrouded in a black velvet cloak descends from her carriage to place a single rose on an unmarked grave.
When Oscar and Marina decide to follow her, they begin a journey that transports them to a forgotten postwar Barcelona-a world of aristocrats and actresses, inventors and tycoons--and reveals a dark secret that lies waiting in the mysterious labyrinth beneath the city streets.

Praise for Marina:
A 2015 ABC Best Book for Young Readers
—-

* "Zafón is a master of both the subtle simile and the outrageous image.... Unlikely discoveries in mysterious, half-ruined mansions alternate with spine-tingling action sequences to create a grotesquerie that will delight horror fans."
—Publishers Weekly, starred review

* "Fans of Neil Gaiman will devour this book, and it deserves a place next to popular mysteries."
—VOYA, starred review

Carlos Ruiz Zafón is the author of seven novels, including the New York Times bestseller The Prince of Mist and the international phenomena The Shadow of the Wind and The Angel's Game. His work has been published in more than fifty countries and honored with numerous awards. He divides his time between Barcelona, and Los Angeles.
Loading...
or support indie stores by buying on