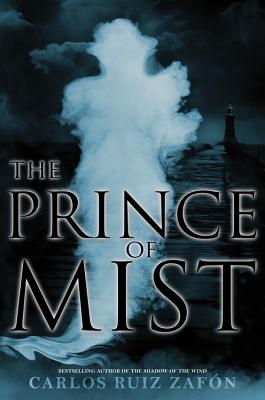 The Prince of Mist (Hardcover)

“Zafon's erie ghost story is illuminated with the lyrical descriptions and intriguing complexities his adult readers have come to rave about. Here, savvy middle-grade readers and young teens will fall prey to Zafon's haunted tale. An evil magician, a protective lighthouse keeper with dark secrets, three young people, and a series of gambles risk the lives of everyone involved.”
— Angela K Sherrill, 57th Street Books, Chicago, IL
View the List

It's wartime, and the Carver family decides to leave the capital where they live and move to a small coastal village where they've recently bought a home. But from the minute they cross the threshold, strange things begin to happen. In that mysterious house still lurks the spirit of Jacob, the previous owners' son, who died by drowning.

With the help of their new friend Roland, Max and Alicia Carver begin to explore the strange circumstances of that death and discover the existence of a mysterious being called the Prince of Mist--a diabolical character who has returned from the shadows to collect on a debt from the past. Soon the three friends find themselves caught up in an adventure of sunken ships and an enchanted stone garden--an adventure that will change their lives forever.

Carlos Ruiz Zafón is the author of six novels, including the international phenomenon The Shadow of the Wind. His work has been published in more than forty different languages, and honored with numerous international awards, including the Edebé Award, Spain's most prestigious prize for young adult fiction. He divides his time between Barcelona, Spain, and Los Angeles, California.

Praise For The Prince of Mist…