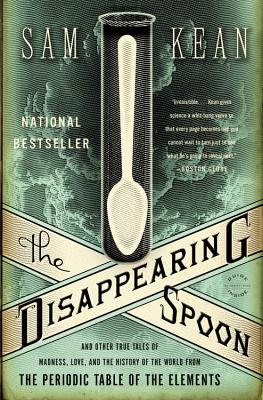 Why did Gandhi hate iodine (I, 53)? How did radium (Ra, 88) nearly ruin Marie Curie's reputation? And why is gallium (Ga, 31) the go-to element for laboratory pranksters?

The Periodic Table is a crowning scientific achievement, but it's also a treasure trove of adventure, betrayal, and obsession. These fascinating tales follow every element on the table as they play out their parts in human history, and in the lives of the (frequently) mad scientists who discovered them. The Disappearing Spoon masterfully fuses science with the classic lore of invention, investigation, and discovery -- from the Big Bang through the end of time.

Though solid at room temperature, gallium is a moldable metal that melts at 84 degrees Fahrenheit. A classic science prank is to mold gallium spoons, serve them with tea, and watch guests recoil as their utensils disappear.

"Kean...unpacks the periodic table's bag of tricks with such aplomb and fascination that material normally as heavy as lead transmutes into gold. A-"—Keith Staskiewicz, Entertainment Weekly

"Kean's writing sparks like small shocks...he gives science a whiz-bang verve so that every page becomes one you cannot wait to turn just to see what he's going reveal next."—Caroline Leavitt, The Boston Globe

"Kean's palpable enthusiasm and the thrill of knowledge and invention the book imparts can infect even the most right-brained reader."—Christine Thomas, Miami Herald

"With a constant flow of fun facts bubbling to the surface, Kean writes with wit, flair, and authority in a debut that will delight even general readers."—Publishers Weekly

"Nearly 150 years of wide-ranging science...and Kean makes it all interesting. Entertaining and enlightening."—Kirkus

"Only once in a rare while does an author come along with the craft and the vision to capture the fun and fascination of chemistry. The Disappearing Spoon is a pleasure and full of insights. If only I had read it before taking chemistry."—Mark Kurlansky, author of Salt and Cod

"If you stared a little helplessly at the chart of the periodic table on the wall of your high school chemistry class, then this is the book for you. It elucidates both the meanings and the pleasures of those numbers and letters, and does so with style and dash."—Bill McKibben, author of Eaarth: Making a Life on a Tough New Planet

"The Disappearing Spoon shines a welcome light on the beauty of the periodic table. Follow plain speaking and humorous Sam Kean into its intricate geography and stray into astronomy, biology, and history, learn of neon rain and gas warfare, meet both ruthless and selfless scientists, and before it is over fall head over heels for the anything but arcane subject of chemistry."—Bill Streever, author of Cold