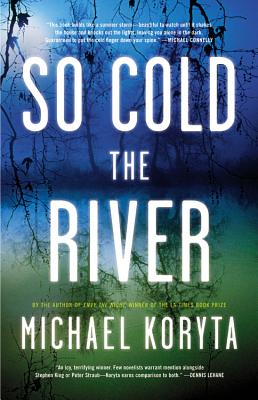 "So Cold the River is a great story, but what held me was the lean, clean prose and the sharp presentation of scenes and dialogue. Michael Koryta is a good story teller and a wonderful stylist."—Joe R. Lansdale

"Kortya's SO COLD THE RIVER is an example of the good-writing equals good-reading equation that makes fright-inducing fiction worthy of our time, attention, and real enjoyment."—Dan Simmons, author of The Terror and Drood

"This book builds like a summer storm. Beautiful to watch until it shakes the house and knocks out the lights, leaving you alone in the dark. Another masterful work from Michael Koryta, SO COLD THE RIVERis guaranteed to put the cold finger down your spine."—Michael Connelly

"An icy, terrifying winner. So Cold the River puts an October chill in your blood by the end of the first chapter. It's not much longer before you've turned on all the lights and rechecked all the window locks. Few novelists warrant mention alongside Stephen King or Peter Straub. Michael Koryta, however, earns comparison to both."—Dennis Lehane

"Michael Koryta is a gifted storyteller. His writing reminded me of the great Ruth Rendell--eerie, suspenseful, and pleasantly wicked. If you're looking for a dose of Midwestern Gothic at its best, SO COLD THE RIVER will be just the thing for you."—Scott Smith, author of A Simple Plan and The Ruins

"Fast-paced and action-packed, So Cold the River is good, unclean fun. Like Joe Hill, Michael Koryta is infusing the old-school supernatural horror novel with new blood. Drink up!"—Stewart O'Nan, author of A Prayer for the Dying

"Koryta spins a spellbinding tale of an unholy lust for power that reaches from beyond the grave."—Publishers Weekly

"[Koryta's] tight, clear prose makes West Baden as creepy as Transylvania, and Eric is a compellingly flawed protagonist. Legions of King and Peter Straub devotees will be delighted."—Thomas Gaughan, Booklist

"A superior specimen...beautiful and resplendent."—Marilyn Stasio, The New York Times

"An edgy, seat-of-your-pants thriller with a supernatural edge that's set in an immaculately restored grand old hotel in the Midwest."—Entertainment Weekly's 18 Books We Can't Wait to Read