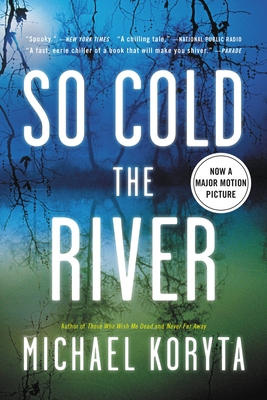 "So Cold the River is a great story, but what held me was the lean, clean prose and the sharp presentation of scenes and dialogue. Michael Koryta is a good story teller and a wonderful stylist."—Joe R. Lansdale

"Kortya's SO COLD THE RIVER is an example of the good-writing equals good-reading equation that makes fright-inducing fiction worthy of our time, attention, and real enjoyment."—Dan Simmons, author of The Terror and Drood

"This book builds like a summer storm. Beautiful to watch until it shakes the house and knocks out the lights, leaving you alone in the dark. Another masterful work from Michael Koryta, SO COLD THE RIVERis guaranteed to put the cold finger down your spine."—Michael Connelly

"An icy, terrifying winner. So Cold the River puts an October chill in your blood by the end of the first chapter. It's not much longer before you've turned on all the lights and rechecked all the window locks. Few novelists warrant mention alongside Stephen King or Peter Straub. Michael Koryta, however, earns comparison to both."—Dennis Lehane

"Michael Koryta is a gifted storyteller. His writing reminded me of the great Ruth Rendell--eerie, suspenseful, and pleasantly wicked. If you're looking for a dose of Midwestern Gothic at its best, SO COLD THE RIVER will be just the thing for you."—Scott Smith, author of A Simple Plan and The Ruins

ACCLAIM FOR ENVY THE NIGHT (2008):
"One of the best of the best, plain and simple."—Michael Connelly

"Superb writing and storytelling from Michael Koryta...Envy the Night represents his best work to date."—George Pelecanos

"This diabolical novel, laid out in simple but eloquent prose and pitch-perfect dialogue, heralds a changing of the guard. I have seen the future of 'The Best Mystery Writer in America' and its name is Michael Koryta."—Ridley Pearson

"With Envy the Night, Koryta earns a seat at the high table of neo-noir crime writers."—Marilyn Stasio, New York Times

"Gangsters, a silent but heroic drifter with second sight, and a whopper of a Florida hurricane. How can you go wrong?"—Stephen King, Entertainment Weekly (on The Cypress House)