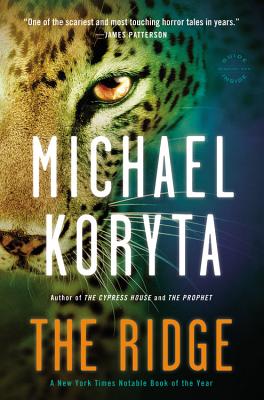 Discover a brilliant thriller set in a remote big-cat sanctuary: "one of the scariest and most touching horror tales in years" (James Patterson).

In an isolated stretch of eastern Kentucky, on a hilltop known as Blade Ridge, stands a lighthouse that illuminates nothing but the surrounding woods. For years the lighthouse has been considered no more than an eccentric local landmark -- until its builder is found dead at the top of the light, and his belongings reveal a troubling local history.

The Ridge is a brilliant thriller from international bestseller Michael Koryta, further evidence of why Dean Koontz has said "Michael Koryta's work resonates into deeper strata than does most of what I read" and why Michael Connelly has named him "one of the best of the best."

"The Ridge is a classic ghost story, penned by a master. I couldn't put it down, even though I almost screamed when the wind blew a branch against the tree outside my study. Yes, it's that scary." --Stephen King


Praise For The Ridge…

"The Ridge is a classic ghost story, penned by a master. I couldn't put it down, even though I almost screamed when the wind blew a branch against the tree outside my study. Yes, it's that scary."—Stephen King

"Somehow, Michael Koryta gets better with every book, no small feat considering the quality of those he's already written. Here's a writer for the new century, one to read, admire and, yes, envy."—Tom Franklin, author of Crooked Letter, Crooked Letter

"An eerie tale... a dark and compulsively readable story...Reading The Ridge is a fine way to chill down a hot summer night. But you'll want to leave the lights on."—Colette Bancroft, Tampa Bay Times

"A freshly imagined and elegantly constructed variation on the dead-of-night ghost story.... [an] eerie tale... readers are swept along by Koryta's narrative voice, which is surprisingly soft and low and poetically insinuating."—Marilyn Stasio, The New York Times

"A man in love with the woman who shot him. Who could possibly resist that story? Not me. Read on, and discover one of the scariest and most touching horror tales in years."—James Patterson

"Koryta delivers another supernatural thriller with punch....Part ghost story, part murder mystery, all thriller, this fast-paced and engaging read will have readers leaving the night-light on long after they have finished the book."—Library Journal (starred review)

"[An] intense novel that has a touch of Stephen King thrown in for good measure... A chilling story that will have you burning the midnight oil and wishing you had a lighthouse to ward off any dark presence around you."—Jackie K. Cooper, The Huffington Post