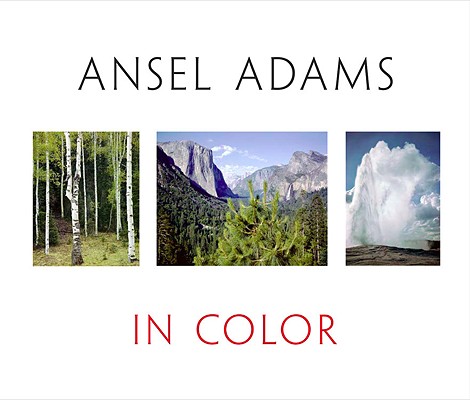 Renowned as America's pre-eminent black-and-white landscape photographer, Ansel Adams began to photograph in color soon after Kodachrome film was invented in the mid 1930s. He made nearly 3,500 color photographs, a small fraction of which were published for the first time in the 1993 edition of ANSEL ADAMS IN COLOR. In this newly revised and expanded edition, 20 unpublished photographs have been added. New digital scanning and printing technologies allow a more faithful representation of Adams's color photography.

Praise For Ansel Adams in Color…

A new book, Ansel Adams in Color, revised and expanded from the 1993 edition, [has] laser scans that might have met even his finicky standards. —Richard B. Woodward

In a career that spanned six decades, Ansel Adams was at once America's foremost landscape photographer and one of its most ardent environmentalists. His work has been published in a multitude of books, posters, and calendars.

Andrea G. Stillman, who worked with Adams in the 1970s, has edited several books of his photographs and writings, including Letters and Images: 1916-1984, Our National Parks, and Ansel Adams: 400 Photographs. She lives in New York City.
John P. Schaefer was a student, collaborator, and close friend of Ansel Adams, and is currently the president of Research Corporation and a Trustee of The Ansel Adams Publishing Rights Trust. In 1975, as president of the University of Arizona, he helped found the Center for Creative Photography. He lives in Tucson, Arizona.
Loading...
or support indie stores by buying on