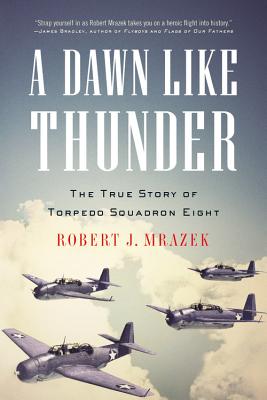 One of the great untold stories of World War II finally comes to light in this thrilling account of Torpedo Squadron Eight and their heroic efforts in helping an outmatched U.S. fleet win critical victories at Midway and Guadalcanal.

Thirty-five American men -- many flying outmoded aircraft -- changed the course of the war, going on to become the war's most decorated naval air squadron, while suffering the heaviest losses in U.S. naval aviation history.

Mrazek paints moving portraits of the men in the squadron, and exposes a shocking cover-up that cost many lives. Filled with thrilling scenes of battle, betrayal, and sacrifice, A Dawn Like Thunder is destined to become a classic in the literature of World War II.

"A Dawn Like Thunder melds a good story with solid and skeptical research....Fast-paced and yet personal, Mrazek's narrative carries the reader to Midway quickly. But it does not stop there, as so many other accounts have....With A Dawn Like Thunder Mrazek earns the title of historian, one that this reviewer does not apply lightly."—Robert Bateman, Washington Post

Bob Mrazek graduated from Cornell University, served in the U.S. Navy, and served five terms in the U.S. Congress. Mrazek authored the Amerasian Homecoming Act, which brought nineteen thousand children of Americans who served in Vietnam to the USA. He also authored the National Film Preservation Act, which established the National Film Registry in the Library of Congress to protect films of cultural importance.

Since leaving Congress, Mrazek has authored ten books, earning the American Library Association's top honor for military fiction, the Michael Shaara award for Civil War fiction, and Best Book (American History) from the Washington Post. He also wrote and co-directed the 2016 feature film The Congressman. He lives in upstate NY and Maine.
Loading...
or support indie stores by buying on