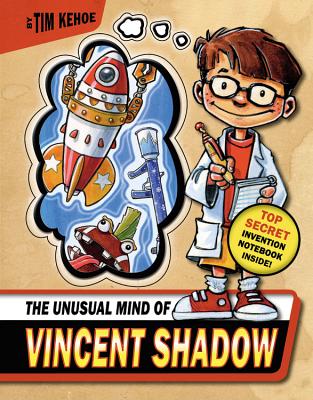 The Unusual Mind of Vincent Shadow

Vincent Shadow isn't particularly good at sports and is constantly being picked on by his classmates at Central Middle School. But it is Vincent's unusually creative mind that truly separates him from other kids his age.

Vincent's top secret attic lab is crammed with toy prototypes --from Liquid Superballs to Bullz-I Basketballs and Sonic Snorkelz--and he has a sketch book filled with drawings of toys he still wants to build. So when a chance encounter with an eccentric toy inventor offers him the opportunity to go from unknown weird kid to toy inventor extraordinaire, Vincent realizes that playtime is over: it's time to get serious about toys.
* Now retitled as Vincent Shadow: Toy Inventor in paperback!

Tim Kehoe is the inventor of numerous toy products, including the world's first colored bubbles, called Zubbles, and he was recently named one of America's 100 Best by Reader's Digest. In 2005, Zubbles was awarded Popular Science's Grand Prize for Innovation. The Unusual Mind of Vincent Shadow was Tim's debut children's book. He lives with his wife and five children in Minnesota. Visit him online at www.timkehoe.com.

Guy Francis's work has been published in a variety of formats for children. Visit him online at www.guyfrancis.com.
Loading...
or
Not Currently Available for Direct Purchase