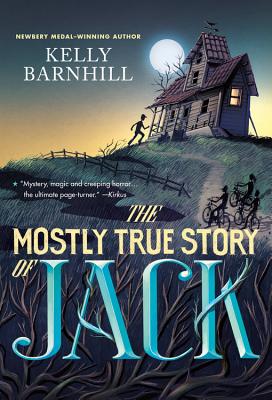 The Mostly True Story of Jack

Enter a world where magic bubbles just below the surface. . . .

When Jack is sent to Hazelwood, Iowa, to live with his strange aunt and uncle, he expects a summer of boredom. Little does he know that the people of Hazelwood have been waiting for him for quite a long time. When he arrives, he begins to make actual friends for the first time in his life-but the town bully beats him up and the richest man in town begins to plot Jack's imminent, and hopefully painful, demise. It's up to Jack to figure out why suddenly everyone cares so much about him. Back home he was practically... invisible.

The Mostly True Story of Jack is a stunning debut novel about things broken, things put back together, and finding a place to belong.

Praise For The Mostly True Story of Jack…

* "Suspense builds steadily, with twists and surprises woven throughout, and friendship emerges as a powerful theme....Barnhill explores the struggle between good and evil and the power of love and sacrifice, creating a provocative and highly original mystery."—Publishers Weekly, starred review

* "Wonderful in the best possible way: filled with wonders and magic, yes, but magic that is ancient, numinous, and tied to the natural world...Barnhill's first novel for children is a marvel of both plotting and characterization, and it provides a foundation for the omnipresent magic that elevates this title to the first rank of contemporary children's literature."—Booklist, starred review

* "A compelling story with genuine characters and a deliciously creepy atmosphere. The suspense builds from the very first page...This delightful story will captivate readers with its blend of magic, mystery, and adventure."—VOYA, starred review

Kelly Barnhill is a poet and writer who also wrote The Witch's Boy and Iron Hearted Violet. The Mostly True Story of Jack, her debut novel, received four starred reviews. Kelly lives in Minnesota with her husband and three children.
Loading...
or support indie stores by buying on