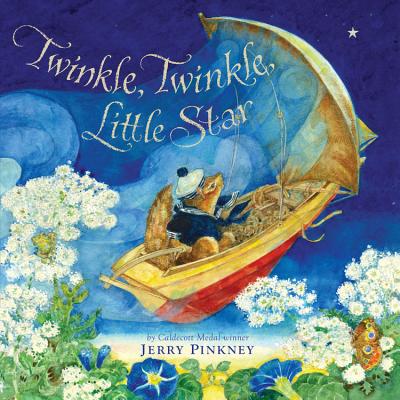 Inspired by one of our most popular children's lullabies, Caldecott Medalist Jerry Pinkney's gentle world -- where the loving arms of nature embrace us despite darkness or uncertainty -- is perfect for easing little ones into dreamland.

Here is the perfect gift and essential item for every child's first library! One of the most acclaimed children's book illustrators of our time now takes his legendary skill with watercolor to new heights in this lavish visual adventure. As a curious little chipmunk leaves his nest to greet the twilight, he gazes at the glittering sky above him. He can't help but also notice the sparkling dewdrops on a spider's web, the lights of the fireflies, and the shimmers of moonlight on the water. "How I wonder what you are!" marvels the tiny creature, launching a dreamlike quest to reach for the stars.

Don't miss these other classic retellings by Jerry Pinkney:
The Little Mermaid
The Lion & the Mouse
The Tortoise & the Hare
The Grasshopper & the Ants
The Three Billy Goats Gruff
Little Red Riding Hood

* "Pinkney's sumptuous elaboration of the familiar lullaby...takes on the same epic scope as his Caldecott winning The Lion and the Mouse.... Just another superb outing from a fixed star twinkling in the children's literature firmament."—Kirkus Reviews, starred review

* "From jacket to cover to endpapers, every element in the book contributes to the dreamlike vision of a curious adventurer exploring the natural world. This appropriate theme for young children finds expression in a series of vividly imagined, gracefully composed, and beautifully detailed illustrations."—Booklist, starred review

"Pinkney's lush artwork is simultaneously naturalistic and whimsical.... [His] flora and fauna are exquisite, as is his palette, dominated by rich earth tones and brilliant blues. Soothing and magical, this one should conjure some sweet dreams."—Publishers Weekly

"Pinkney... brings a... sumptuous, color-saturated aesthetic to this reimagining of the familiar bedtime lullaby.... a free-form journey from woodland to dreamland."—The New York Times

Jerry Pinkney is one of the most heralded children's book illustrators of all time. He has the rare distinction of being the recipient of five Caldecott Honors and the winner of the 2010 Caldecott medal for The Lion and the Mouse. He has published numerous reimagined classic tales, including The Little Mermaid, The Tortoise & the Hare, The Grasshopper & the Ants, The Three Billy Goats Gruff, Little Red Riding Hood, and Twinkle, Twinkle, Little Star. He has won the Coretta Scott King Award five times, the Coretta Scott King Honor four times, and has been nominated for the prestigious Hans Christian Anderson Award. He was also the first children's book illustrator elected to the American Academy of Arts and Sciences. He lives with his wife, author Gloria Jean Pinkney, in Croton-on-Hudson, New York. The artist invites you to visit his website at jerrypinkneystudio.com.
Loading...
or
Not Currently Available for Direct Purchase