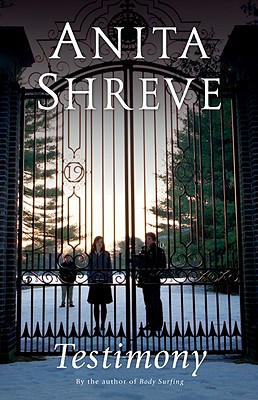 “This book shows the impact of a school sex scandal on the students, the parents, and the faculty of a small New England boarding school. The characters are deftly written, and the mother of one of the male students involved is especially well drawn and heartbreaking.”
— Terry Lucas, The Open Book, Westhampton Bch, NY
View the List

At a New England boarding school, a sex scandal is about to break. Even more shocking than the sexual acts themselves is the fact that they were caught on videotape. A Pandora's box of revelations, the tape triggers a chorus of voices--those of the men, women, teenagers, and parents involved in the scandal--that details the ways in which lives can be derailed or destroyed in one foolish moment.

Writing with a pace and intensity surpassing even her own greatest work, Anita Shreve delivers in TESTIMONY a gripping emotional drama with the impact of a thriller. No one more compellingly explores the dark impulses that sway the lives of seeming innocents, the needs and fears that drive ordinary men and women into intolerable dilemmas, and the ways in which our best intentions can lead to our worst transgressions.

Anita Shreve is the critically acclaimed author of 14 novels, including Body Surfing, The Pilot's Wife, which was a selection of Oprah's Book Club, and The Weight of Water, which was a finalist for England's Orange Prize. She lives in Massachusetts.


"Shreve, consummate craftsman and frequent provocateur, is on fire in her latest novel, a mesmerizing read centering on a sex scandal at a prestigious Vermont prep school....Shreve views all of the characters, even the most flawed, with a good deal of compassion, revealing the heartbreaking consequences of a single reckless act."
-Booklist (starred review)