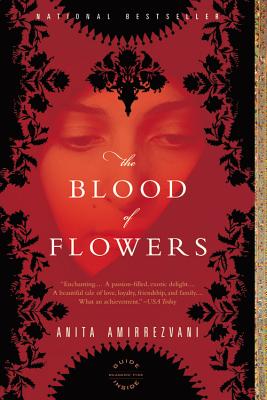 The Blood of Flowers

“It is a feat to bring off a serious, historical novel in which the history doesn't overwhelm the human story and the human tale simply uses the history as furniture. In this most impressive, captivating debut, Amirrezvani's novel of a young woman finding her way into life in 17th-century Iran does justice to both story and history.”
— Rick Simonson, The Elliott Bay Book Company, Seattle, WA
View the List

A sensuous and richly-imagined historical novel that centers on a skilled young carpet weaver, her arranged marriage, and her quest for self-determination in 17th-century Persia.

In 17th-century Iran, a 14-year-old woman believes she will be married within the year. But when her beloved father dies, she and her mother find themselves alone and without a dowry. With nowhere else to go, they are forced to sell the brilliant turquoise rug the young woman has woven to pay for their journey to Isfahan, where they will work as servants for her uncle, a rich rug designer in the court of the legendary Shah Abbas the Great.

Despite her lowly station, the young woman blossoms as a brilliant designer of carpets, a rarity in a craft dominated by men. But while her talent flourishes, her prospects for a happy marriage grow dim. Forced into a secret marriage to a wealthy man, the young woman finds herself faced with a daunting decision: forsake her own dignity, or risk everything she has in an effort to create a new life.

Anita Amirrezvani was born in Tehran, Iran, and raised in San Francisco. For ten years, she was a dance critic for newspapers in the Bay Area. She has received fellowships from the National Arts Journalism Program, the NEA's Arts Journalism Institute for Dance, and the Hedgebrook Foundation for Women Writers. Amirrezvani is a student in the MFA program in fiction at San Francisco State University.
Loading...
or support indie stores by buying on
(This book is on backorder)