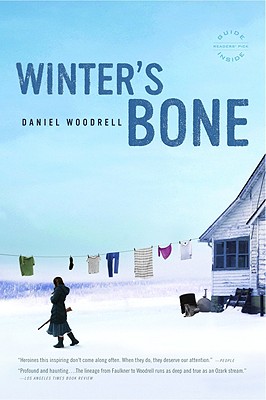 Daniel Woodrell's modern classic is an unforgettable tale of desperation and courage that inspired the award-winning film starring Jennifer Lawrence.

"The lineage from Faulkner to Woodrell
runs as deep and true as an Ozark stream in
this book. . .his most profound and haunting
yet."—Los Angeles Times Book Review

"Woodrell's Old Testament prose and blunt vision have a chilly timelessness that suggests this novel will speak to readers as long as there are readers."—New York Times Book Review

"Daniel Woodrell has produced another stunner, a bleak, beautifully told story about the inescapable bonds of land and blood--fiction at its finest."—Kansas City Star

"Heroines this inspiring don't come along often. When they do, they deserve our attention."—People

"The plot of WINTER'S BONE is uncomplicated, yet it packs a kind of biblical, Old West, Cormac McCarthy wallop--hard and deep."—Cleveland Plain Dealer

Five of Daniel Woodrell's published novels were selected as New York Times Notable Books of the Year. Tomato Red won the PEN West Award for the Novel in 1999. Woodrell lives in the Ozarks near the Arkansas line with his wife, Katie Estill.
Loading...
or support indie stores by buying on