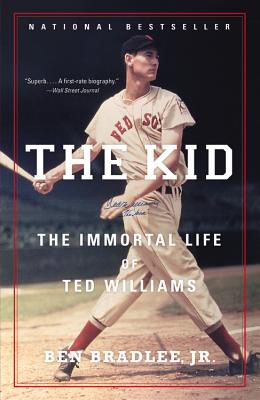 The Immortal Life of Ted Williams

Williams was the best hitter in baseball history. His batting average of .406 in 1941 has not been topped since, and no player who has hit more than 500 home runs has a higher career batting average. Those totals would have been even higher if Williams had not left baseball for nearly five years in the prime of his career to serve as a Marine pilot in WWII and Korea. He hit home runs farther than any player before him -- and traveled a long way himself, as Ben Bradlee, Jr.'s grand biography reveals. Born in 1918 in San Diego, Ted would spend most of his life disguising his Mexican heritage. During his 22 years with the Boston Red Sox, Williams electrified crowds across America -- and shocked them, too: His notorious clashes with the press and fans threatened his reputation. Yet while he was a God in the batter's box, he was profoundly human once he stepped away from the plate. His ferocity came to define his troubled domestic life. While baseball might have been straightforward for Ted Williams, life was not.

The Kid is biography of the highest literary order, a thrilling and honest account of a legend in all his glory and human complexity. In his final at-bat, Williams hit a home run. Bradlee's marvelous book clears the fences, too.

Praise For The Kid: The Immortal Life of Ted Williams…

"Sumptuous..The Kid reads like an epic....Bradlee has given us the fullest exploration yet of his monumental ego and the best explanation for his vast inferiority complex."—Allen Barra, Boston Globe

"What distinguishes Bradlee's The Kid from the rest of Williams lit is, its size and the depth of its reporting....Bradlee's expansiveness enables his book to transcend the familiar limits of the sports bio and to become instead a hard-to-put-down account of a fascinating American life."—Charles McGrath, New York Times Book Review

"Superb....Ted Williams hated what he considered invasions of his privacy, but perfectionist that he was, he would probably have to concede that the work ethic that underpins The Kid is exemplary....When I began reading this book, I thought that only baseball fans would find it interesting. But after finishing The Kid, I suspect that even those indifferent to the sport might find its human drama absorbing."—Howard Schneider, Wall Street Journal

"The prose is breezy, the research and reporting are impeccable....This book very much sets out to be the definitive document of a great, complicated, fascinating person and ultimately, it succeeds."
—Dave Bry, Slate

"Bradlee's brilliant account is required reading for any Red Sox fan. It's also a fascinating portrait of a complex character that a baseball agnostic or even a Yankees fan will find hard to put down."
—Jerry Harkavy, Associated Press
or support indie stores by buying on
Copyright © 2020 American Booksellers Association