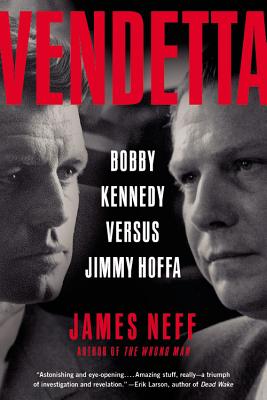 From 1957 to 1964, Robert Kennedy and Jimmy Hoffa channeled nearly all of their considerable powers into destroying each other. Kennedy's battle with Hoffa burst into the public consciousness with the 1957 Senate Rackets Committee hearings and intensified when his brother named him attorney general in 1961. RFK put together a "Get Hoffa" squad within the Justice Department, devoted to destroying one man. But Hoffa, with nearly unlimited Teamster funds, was not about to roll over.

Drawing upon a treasure trove of previously secret and undisclosed documents, James Neff has crafted a brilliant, heart-pounding epic of crime and punishment, a saga of venom and relentlessness and two men willing to do anything to demolish each other.

"If you think you know it all, you don't. James Neff has turned Bobby Kennedy's headline-making clash with Jimmy Hoffa into a psychological thriller about two tough, powerful and vengeful men who fought with all they had, exhausting both. This is not a book about a good bobby versus a bad hoffa. It is a study of two men who always got what they wanted staging a shootout on the streets of Laredo. And, as Neff tells it, there were no winners."
—Seymour M. Hersh, winner of the Pulitzer Prize

"From the violence of its gripping opening to the sorrow of its close, this is an astonishing and eye-opening account of the vendetta--obsessive, intrigue-filled, hatred-tinged--that pitted Robert F. Kennedy against Teamster boss Jimmy Hoffa, and nearly consumed both. Amazing stuff, really--a triumph of investigation and revelation."
—Erik Larson, author of Dead Wake

"Vendetta is an exciting and compelling account of the titanic struggle between Robert Kennedy and Jimmy Hoffa, one of the most extraordinary battles between the forces of good and evil in recent American history. With a master investigator's eye and a novelist's flair, James Neff makes the Kennedy-Hoffa duel come alive with many new historical insights and with all the blood and muscle of these two unforgettable men. If you ever wondered what it would be like to work with Robert Kennedy, the young hard-driving idealistic investigator of corruption, this book is for you."—Thomas Maier, author of When Lions Roar: The Churchills and the Kennedys

James Neff has overseen multiple Pulitzer Prize-winning series as investigations editor at the Seattle Times. The author of The Wrong Man, Unfinished Murder, and Mobbed Up, he lives in the Seattle area.
Loading...
or
Not Currently Available for Direct Purchase