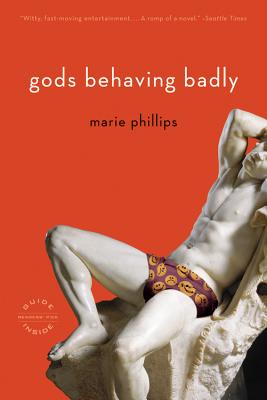 In this “witty and entertaining” twist on Greek mythology (James Urquhart), the once all-powerful gods find themselves scraping by in a run-down London townhouse as they learn how to be human—and try not to destroy the world in the process.

Being a Greek god is not all it once was. Yes, the twelve gods of Olympus are alive and well in the twenty-first century, but they are crammed together in a London townhouse—and none too happy about it. And they've had to get day jobs: Artemis as a dog-walker, Apollo as a TV psychic, Aphrodite as a phone sex operator, Dionysus as a DJ.

Even more disturbingly, their powers are waning, and even turning mortals into trees—a favorite pastime of Apollo's—is sapping their vital reserves of strength.

Soon, what begins as a minor squabble between Aphrodite and Apollo escalates into an epic battle of wills. Two perplexed humans, Alice and Neil, who are caught in the crossfire, must fear not only for their own lives, but for the survival of humankind. Nothing less than a true act of heroism is needed—but can these two decidedly ordinary people replicate the feats of the mythical heroes and save the world?

Marie Phillips was born in London in 1976. She studied anthropology at Cambridge University and worked as a researcher at the BBC. More recently she worked as an independent bookseller while writing Gods Behaving Badly.
Loading...
or support indie stores by buying on