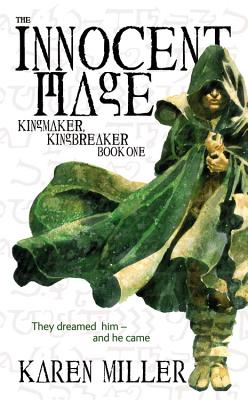 "The Innocent Mage is come, and we stand at the beginning of the end of everything."

Being a fisherman like his father isn't a bad life, but it's not the one that Asher wants. Despite his humble roots, Asher has grand dreams. And they call him to Dorana, home of princes, beggars and the warrior mages who have protected the kingdom for generations.

Little does Asher know, however, that his arrival in the city is being closely watched by members of the Circle, people dedicated to preserving an ancient magic.

Asher might have come to the city to make his fortune, but he will find his destiny.

Karen Miller was born in Vancouver, Canada, and moved to Australia with her family when she was two. Apart from a three-year stint in the UK after graduating from university with a BA in communications, she's lived in and around Sydney ever since. Karen started writing stories while still in elementary school, where she fell in love with speculative fiction. She's held a variety of interesting jobs but now writes full time.
Loading...
or support indie stores by buying on