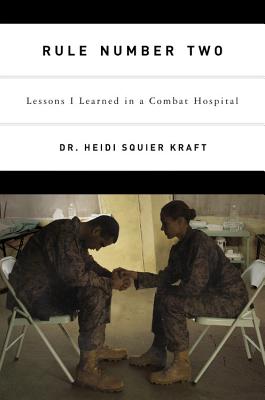 Lessons I Learned in a Combat Hospital

When Lieutenant Commander Heidi Kraft's twin son and daughter were fifteen months old, she was deployed to Iraq. A clinical psychologist in the US Navy, Kraft's job was to uncover the wounds of war that a surgeon would never see. She put away thoughts of her children back home, acclimated to the sound of incoming rockets, and learned how to listen to the most traumatic stories a war zone has to offer.
One of the toughest lessons of her deployment was perfectly articulated by the TV show M*A*S*H: "There are two rules of war. Rule number one is that young men die. Rule number two is that doctors can't change rule number one." Some Marines, Kraft realized, and even some of their doctors, would be damaged by war in ways she could not repair. And sometimes, people were repaired in ways she never expected. RULE NUMBER TWO is a powerful firsthand account of providing comfort admidst the chaos of war, and of what it takes to endure.

Heidi Squier Kraft received her PhD in clinical psychology from the University of California, San Diego School of Medicine in 1996. After several years as a flight psychologist with the US Navy, she gave birth to twins in 2002. In February 2004, she deployed to Iraq for seven months. She left active duty in March 2005 after nine years in the Navy, and is now Deputy Program Coordinator, US Navy Combat Stress Control. She lives in San Diego with her husband and kids.

Praise For Rule Number Two: Lessons I Learned in a Combat Hospital…

"A necessary...book for anyone wishing to understand."
-Booklist

"Direct and honest...every page provides evidence of the long-lasting effect [Kraft's] time in Iraq has had on her."
-Bloomberg.com

"Emotional and powerful, it's a piece of work that is worth sitting down with."
-Palos Verdes Peninsula News