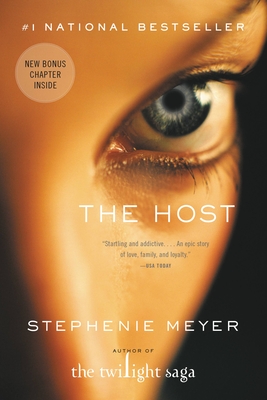 Praise For The Host: A Novel…

"Meyer has, like one of her vampires, turned into something rare and more than merely human: a literary phenomenon....The way she manages the reader's curiosity, maintaining tension and controlling the flow of information, is simply virtuosic....People do not want to just read Meyer's books; they want to climb inside them and live there."—Lev Grossman, Time

"An epic story of love, family, and loyalty. . . . The Host is The X-Files meets Days of Our Lives."—Carol Memmott, USA Today

"Meyer is more interested in relationships than in flashy genre conventions. . . . Her affirmative life lesson is disarming."—Jeff Giles, Entertainment Weekly

"The Host lives up to the hype, blending science fiction and romance in a way that has never worked so well."—Jane Jorgenson, Library Journal

"Stephenie Meyer is an amazing phenomenon--out of the brightness of her mind and spirit comes the illuminated darkness of her stories. For no matter how much pain her characters suffer, Meyer infuses the tales with light and hope."—Orson Scott Card

"A fantastic, inventive, thoughtful, and powerful novel. The Host should come with a warning label: it will grab you and keep you reading well into the wee hours of night, and keep you thinking, deeply, hauntingly, well after the final word. Stephenie Meyer captures characters and handles story line like a master--a hybrid combination of Stephen King and Isaac Asimov."
—Ridley Pearson

"A brilliant and fascinating premise.... Its mix of adventure and new love on a new Earth is just right to get lost in this summer."—Sherri Hallgren, Pittsburgh Post-Gazette