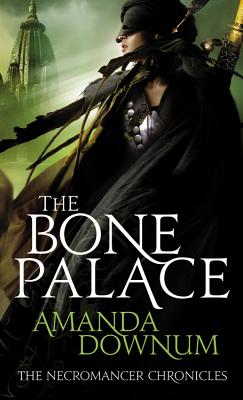 The Bone Palace (The Necromancer Chronicles #2)

Death is no stranger in the city of Erisén -- but some deaths attract more attention than others.

When a prostitute dies carrying a royal signet, Isyllt Iskaldur, necromancer and agent of the Crown, is called to investigate. Her search leads to desecrated tombs below the palace, and the lightless vaults of the vampiric vrykoloi deep beneath the city. But worse things than vampires are plotting in Erisén. . .

As a sorcerous plague sweeps the city and demons stalk the streets, Isyllt must decide who she's prepared to betray, before the city built on bones falls into blood and fire.

Amanda Downum was born in Virginia, and has since spent time in Indonesia, Micronesia, Missouri, and Arizona. In 1990 she was sucked into the gravity well of Texas, and has not yet escaped. She graduated from the University of North Texas with a degree in English Literature, and has spent the last ten years working in a succession of libraries and bookstores; she is very fond of alphabetizing. She currently lives near Austin in a house with a spooky attic, which she shares with her long-suffering husband and fluctuating numbers of animals and half-finished novels. She spends her spare time making jewelry and falling off perfectly good rocks. To learn more about the author, visit www.amandadownum.com.
Loading...
or
Not Currently Available for Direct Purchase