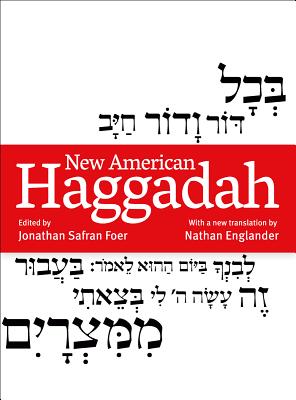 The perfect book for every Passover seder, from editor Jonathan Safran Foer and translator Nathan Englander: this bestselling modern prayer book brilliantly interprets one of our oldest and most sacred stories.
Read each year around the seder table, the Haggadah recounts through prayer, song, and ritual the extraordinary story of Exodus, when Moses led the Israelites out of slavery in Egypt to wander the desert for forty years before reaching the Promised Land.

Now, Jonathan Safran Foer has orchestrated a new way of experiencing and understanding one of our oldest, most timeless, and sacred stories, with a new translation of the traditional text by Nathan Englander and provocative commentary by major Jewish writers and thinkers Jeffrey Goldberg, Lemony Snicket, Rebecca Newberger Goldstein, and Nathaniel Deutsch. Ravishingly designed and illustrated by the acclaimed Israeli artist and calligrapher Oded Ezer, New American Haggadah is an utterly unique and absorbing prayer book, the first of its kind, that brings together some of the preeminent voices of our time.
"The best book of modern religious thought in recent memory." --The Millions
"What makes this haggadah shine is the combination of commentary, design, and illustration." --Financial Times

Jonathan Safran Foer is the author of Everything Is Illuminated, Extremely Loud and Incredibly Close, and Eating Animals. His books have been translated into thirty-six languages. Everything Is Illuminated received a National Jewish Book Award and a Guardian First Book Award, and was made into a film by Liev Schreiber. Foer lives in Brooklyn with his wife, the novelist Nicole Krauss, and their children.

Nathan Englander is the author of the novel, The Ministry of Special Cases, the play, The Twenty-Seventh Man, and the story collections For the Relief of Unbearable Urges and What We Talk About When We Talk About Anne Frank, which won the Frank O'Connor International Short Story Award and was a Pulitzer Prize Finalist. He lives in Brooklyn, New York with his wife Rachel Silver.

Praise for EVERYTHING IS ILLUMINATED:

"Not since...A Clockwork Orange has the English language been simultaneously mauled and energized with such brilliance and brio."—Francine Prose, New York Times Book Review

"What makes this haggadah shine is the combination of commentary, design, and illustration."
—Financial Times

"The best book of modern religious thought in recent memory."
—The Millions