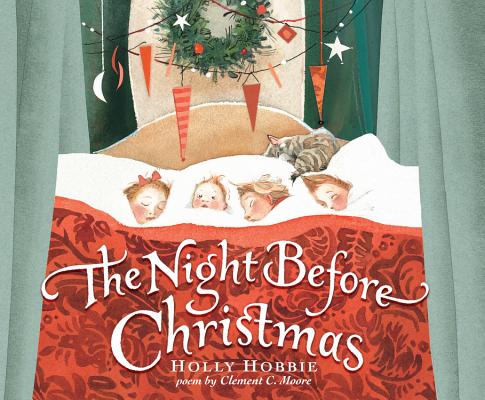 Beloved illustrator Holly Hobbie offers a timeless take on the best-known Christmas poem of all time.

In the twilight hours of Christmas Eve, a hushed world enveloped in moonlit snow waits for the soft tinkling of sleigh bells to announce the most magical night of the year. Then comes a thump on the rooftop, a scratching in the chimney, and suddenly--Santa Claus appears!

In her fresh imagining of Clement C. Moore's enduring poem, acclaimed master watercolorist Holly Hobbie captures the magic of this timeless tale. Her vision of the night before Christmas glows with warmth and feeling, and features the delightful addition of a child's-eye view, which magnifies the wonder of this exciting, mysterious time.

Praise For The Night Before Christmas…

"Hobbie's is one of the most attractive and engaging versions of Moore's poem, an edition to be savored, saved and shared."—The New York Times

* "There is a hushed, magical feeling in Hobbie's masterful illustrations.... Every element of the book's thoughtful design is skillfully chosen.... One to savor over and over, year after year."—Kirkus Reviews, starred review

"This version of the holiday classic stand[s] out.... A fine edition to freshen up holiday collections."—School Library Journal

Holly Hobbie has worked as an artist for more than thirty years and is the author of eleven highly acclaimed Toot & Puddle picture books as well as Gem, Fanny, Fanny and Annabelle, and Everything but the Horse. She has also written an illustrated memoir, The Art of Holly Hobbie.
Loading...
or support indie stores by buying on