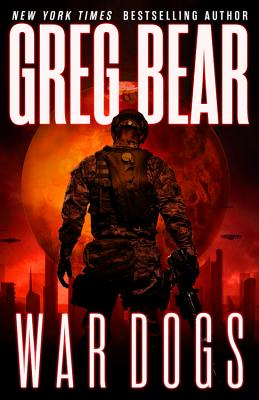 An epic interstellar tale of war from a master of science fiction.

One more tour on the red. Maybe my last.

They made their presence on Earth known thirteen years ago.

Providing technology and scientific insights far beyond what mankind was capable of. They became indispensable advisors and promised even more gifts that we just couldn't pass up. We called them Gurus.

It took them a while to drop the other shoe. You can see why, looking back.

It was a very big shoe, completely slathered in crap.

They had been hounded by mortal enemies from sun to sun, planet to planet, and were now stretched thin -- and they needed our help.

And so our first bill came due. Skyrines like me were volunteered to pay the price. As always.

These enemies were already inside our solar system and were moving to establish a beachhead, but not on Earth.

"Bear, as a writer, seems almost more at home on the deadly flats of Mars...than he does back on planet Earth."—NPR Books on War Dogs

"Not for those who prefer their space opera simple-minded, this beautifully written tale where nothing is as it seems will please readers with a well-developed sense of wonder."—Publisher's Weekly (starred review) on Hull Zero Three

"Greg Bear is one contemporary master of the old ways, and in Hull Zero Three he gives the generation starship theme - crystallized beautifully by Robert Heinlein in 1941's "Universe" - a vigorous makeover...."—bn.com

"I loved Hull Zero Three - this book reminds me of why I fell in love with science fiction in the first place. Searing questions of humanity, a good old fashioned riddle of a plot, and excellent conceptualization make Hull Zero Three more than worth the effort."—thebooksmugglers.com