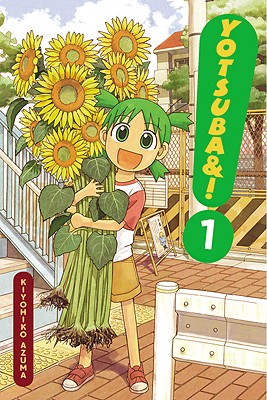 Hello! This is Koiwai Yotsuba, Yotsuba Koiwai...um, YOTSUBA! Yotsuba moved
with Daddy to a new house from our old house waaaaaaay over there! And
moving's fun 'cos people wave! (Ohhhh!!) And Yotsuba met these nice
people next door and made friends to play with (one of 'em acted like
one of those bad strangers Daddy told Yotsuba not to go with, but it was
okay in the end). I hope we get to play a lot. And eat ice cream!
And-and-and...oh yeah! You should come play with Yotsuba too!

Kiyohiko Azuma is the bestselling creator of AZUMANGA DAIOH and the critically acclaimed YOTSUBA&! which won the Excellence Prize in the manga category at the Japan Media Arts Festival in 2006. The series was also nominated for an Eisner Award in the U.S. in 2008 and has been a regular New York Times bestseller.
Loading...
or support indie stores by buying on
(This book is on backorder)