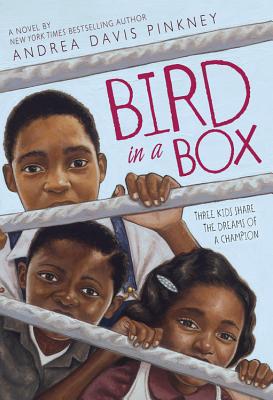 Bird in a Box

In a small upstate New York town during the Great Depression, three children--Hibernia, Willie, and Otis--are about to meet.
Hibernia dreams of becoming a famous singer and performing at Harlem's swanky Savoy Ballroom.Willie is recovering from a tragedy that prevents him from becoming a junior boxing champ.Otis spends every night glued to the radio, listening to the voices that remind him of Daddy and Ma.
Each of them is looking for hope, and they all find it in the thrilling boxing matches of young Joe Louis. They know Joe has a good chance of becoming the country's next heavyweight champion. What they don't know is that during this unforgettable year, the three of them will become friends.

Sean Qualls is the illustrator of a number of celebrated books for children, including Before John Was a Jazz Giant by Carole Boston Weatherford, for which he received a Coretta Scott King Illustrator Honor, and Dizzy by Jonah Winter, an ALA Notable Book, a Kirkus Best Book, and a School Library Journal Best Book of the Year. He has also illustrated Little Cloud and Lady Wind by Toni Morrison and her son Slade and Giant Stepsto Change The World by Spike and Tonya Lee, which will be published in January 2011. Sean lives with his wife, illustrator Selina Alko, and their two children in Brooklyn, NY.
Loading...
or
Not Currently Available for Direct Purchase