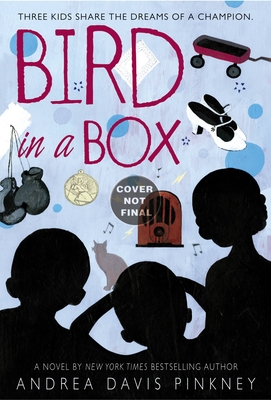 Bird in a Box

Otis, Willie, and Hibernia are three children with a lot in common: they've all lost a loved one, they each have secret dreams, and they won't stop fighting for what they want. And they're also a lot like their hero, famed boxer Joe Louis. Throughout this moving novel, their lives gradually converge to form friendship, family, and love. Their trials and triumphs echo those of Joe Louis, as he fights to become the heavyweight boxing champion.

Andrea Pinkney masterfully weaves in factual information about Joe Louis and actual radio commentary from his fights, enriching the narrative of this uniquely rendered and beautifully written novel.

Sean Qualls is the illustrator of a number of celebrated books for children, including Before John Was a Jazz Giant by Carole Boston Weatherford, for which he received a Coretta Scott King Illustrator Honor, and Dizzy by Jonah Winter, an ALA Notable Book, a Kirkus Best Book, and a School Library Journal Best Book of the Year. He has also illustrated Little Cloud and Lady Wind by Toni Morrison and her son Slade and Giant Stepsto Change The World by Spike and Tonya Lee, which will be published in January 2011. Sean lives with his wife, illustrator Selina Alko, and their two children in Brooklyn, NY.
Loading...
or
Not Currently Available for Direct Purchase