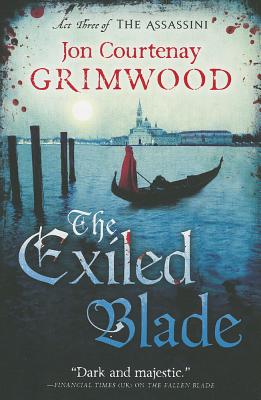 The Exiled Blade (The Assassini #3)

Snow shrouds Venice in cold darkness, ice fills the canals, and a thousand ghosts pluck at the shadow's edge.

A violent attack on Lady Giulietta's son forces Tycho from his new-found happiness and back into the treacherous intrigue of the court. For Giulietta's sake he would go to the world's end to track down those responsible.

As Venice teeters on the brink of civil war, its warring families prepare to discover who is a player and who a pawn in the coming struggle for power.

The Exiled Blade is the climatic finale to Tycho's story.

Praise For The Exiled Blade (The Assassini #3)…

"Grimwood adroitly combines a satisfying complexity with visceral detail and bouts of astounding violence, knit together by suitably Machiavellian intrigue."
—Kirkus Reviews on The Fallen Blade

"Sharp as a stiletto, dark and dazzling as a masquerade. Grimwood's Venice is totally compelling."
—Mike Carey on The Fallen Blade

"The climax is quick moving and vivid - this is a real page-turner."
—RT Book Reviews (4-1/2 Stars) on The Fallen Blade

Jon Courtenay Grimwood was born in Malta and christened in the upturned bell of a ship. He grew up in the Far East, Britain and Scandinavia. Apart from writing novels he works for magazines and newspapers. For five years he wrote a monthly review column for the Guardian.

JCG's novels Felaheen and End of the World Blues, won the BSFA Award for Best Novel. He has been shortlisted twice for the Arthur C. Clarke Award, and shortlisted for the British Fantasy Award, the August Derleth Award (UK), John W Campbell Memorial Award (US), among other awards.

He is married to the journalist and novelist Sam Baker, currently editor-in-chief of Red. They divide their time between London and Winchester.
Loading...
or support indie stores by buying on