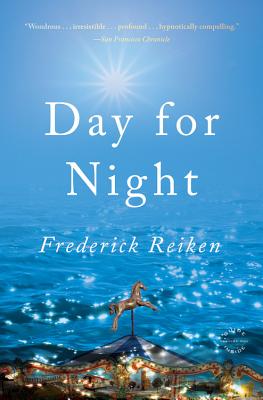 In Day For Night, critically acclaimed writer Frederick Reiken spins an unlikely and yet utterly convincing story about people lost and found. They are all refugees from their own lives or history's cruelties, and yet they wind up linked to each other in compelling and unpredictable ways that will keep you guessing until the very end.

Praise For Day for Night: A Novel…

"Brilliant plotting, haunting characters and an elegiac tone distinguish this dazzling novel by Reiken...Contemporary fiction at its best-accessible, breathtaking and heartbreaking."--Kirkus Reviews (starred)

"An intricate, subtly fantastic, six-degrees-of-separation tale shaped by the beauty, continuity, and mystery of nature. . . . It's an entrancing and profoundly complicated tale Reiken tells as he slowly reveals the submerged connections among his intriguing characters while sustaining psychological sophistication, suspense, shrewd humor, and many-tiered compassion."--Booklist (starred)

"A compelling tale in which one thread deftly connects 10 people....An imaginative and exciting read."--Publishers Weekly

"What begins as a typical family drama becomes a chain reaction of plot twists. . . . . Day for Night is a beautiful test in patience, but by the end, you'll see it was worth the wait."--Very Short List

"A thought-provoking, intricate portrait of the far-reaching, intergenerational implications of the Holocaust - and how fortuitous circumstances can bring people from both sides of a tragedy closer together, and, in some cases, further apart."--S. Kirk Walsh, Los Angeles Times

"Day for Night is a joy and a rare thing, a feast for the mind and the heart that almost demands a second reading."--Daniel Goldin, Boswell Book Co./NPR

"This novel magically and eloquently links swimming with manatees in Florida with a comatose young man held hostage in Utah, a fugitive radical woman, and a kibbutz on the Dead Sea. It's beautifully written, magnificently cerebral, entirely compelling."-- Ellen Meeropol, Odyssey Bookshop

Frederick Reiken is the author of two previous novels, The Odd Sea (1998) and The Lost Legends of New Jersey (2000). His short stories have appeared in The New Yorker and his essays in the anthology Living on the Edge of the World (2008). He has worked as a reporter and columnist and is currently a member of the writing faculty at Emerson College.
Loading...
or support indie stores by buying on