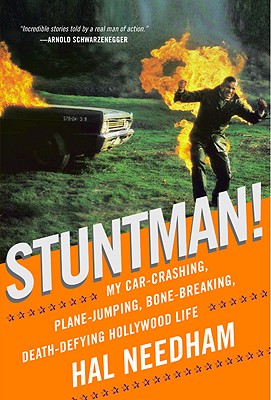 The classic no-holds-barred memoir from Hollywood's most legendary stuntman -- an inspiration for Brad Pitt's character Cliff Booth in Once Upon a Time in Hollywood -- is "full of incredible stories as told by a real man of action" (Arnold Schwarzenegger).

Yep that's me, Hal Needham, on the cover doing a fire stunt. When you're on fire you don't dare breathe because if you do, you'll suck those flames right down your throat. I was Hollywood's highest paid stuntman so I should know.

I wrecked hundreds of cars, fell from tall buildings, got blown up, was dragged by horses, and along the way broke 56 bones, my back twice, punctured a lung and knocked out a few teeth...I hung upside down by my ankles under a bi-plane in The Spirit of St. Louis, jumped between galloping horses in

Little Big Man, set a world record for a boat stunt on Gator, jumped a rocket powered pick-up truck across a canal for a GM commercial, was the first human to test the car airbag-and taught John Wayne how to really throw a movie punch.

Life also got exciting outside of the movie business. I had my Ferrari stolen right from under my nose, flew in a twin-engine Cessna with a passed out pilot, rescued the cast and crew from a Russian invasion in Czechoslovakia, and once took six flight attendants on a date. I owned the Skoal-Bandit NASCAR race team, the sound-barrier breaking Budweiser Rocket Car and drove a souped-up, fake ambulance in a "little" cross-country race called The Cannonball Run, which became the movie I directed by the same name. Oh yeah, I also directed Smokey and the Bandit, Hooper and several other action/comedy movies that I liked a bunch.

I was a sharecropper's son from the hills of Arkansas who became a Hollywood stuntman. That journey was a tough row to hoe. I continually risked my life but that was the career I chose. I was never late to the set and did whatever I had to do to get the job done.

Hollywood's not all sunglasses and autographs. Let me tell you a few stories...

Hal Needham's career has included work on 4,500 television episodes and 310 feature films. He directed 10 features, including the classics Smokey and the Bandit, Hooper, and The Cannonball Run. He set trends in movies (the first director to show outtakes during end credits) and NASCAR (the first team owner to use telemetry technology). His Skoal-Bandit race team was one of the most popular NASCAR teams ever -- second only to that of The King, Richard Petty.

Hal has set Guinness World Records and was the financier and owner of the Budweiser Rocket Car (now on display in the Smithsonian Museum), the first land vehicle to break the sound barrier -- travelling at 739.666 mph. The highest paid stuntman in the world, he has broken fifty-six bones and his back (twice), was the first human to test the car airbag, and has fought for the respect and recognition that stuntmen and stuntwomen deserve for their contribution to the world of moviemaking. His many awards include an Emmy and an Academy Award.