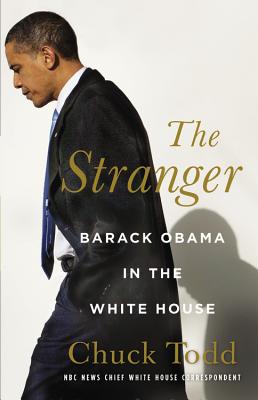 Barack Obama in the White House

Chuck Todd's gripping, fly-on-the-wall account of Barack Obama's tumultuous struggle to succeed in Washington.
Barack Obama won the presidency in 2008 partly because he was a Washington outsider. But if he'd come to the White House thinking he could change the political culture, he soon discovered just how difficult it was to swim against an upstream of insiders, partisans, and old guard networks allied to undermine his agenda---including members of his own party. He would pass some of the most significant legislation in American history, but his own weaknesses torpedoed some of his greatest hopes.

In THE STRANGER, Chuck Todd draws upon his unprecedented inner-circle sources to create a gripping account of Obama's White House tenure, from the early days of drift and helplessness to a final stand against the GOP in which an Obama, at last liberated from his political future, finally triumphs.

Chuck Todd is NBC News Political Director and the moderator of Meet the Press" the flagship Sunday morning public affairs program and longest-running broadcast in television history. Prior to taking the helm of Meet the Press in September 2014, Todd served as NBC News Chief White House Correspondent (2008-2014) as well as host of MSNBC's The Daily Rundown (2010-2014). Todd has held the role of Political Director since March 2007, leading all aspects of the news division's political coverage and analysis across every platform. He is also the editor of First Read, NBC's must-read guide to political news and trends in and around Washington, D.C.

Praise For The Stranger: Barack Obama in the White House…

"Richly sourced and deeply informed....There aren't many Washington journalists with the access, reporting skills, and authorial dexterity to write a comprehensive history of a presidential administration while it's still racking up miles on Air Force One. Todd delivers a surprising depth of insider reporting considering how few insiders have spoken publickly about this administration."—Scott Porch, Chicago Tribune

"Todd is the rare Washington commentator whose on-air musings are consistently backed by authoritative reporting....He knows his subject, and he knows how to write....Readers of The Stranger unquestionably benefit from Mr. Todd's Beltway-insider status."—Robert Draper, Wall Street Journal

"Revealing....Mr. Todd has grounded his arguments in hundreds of interviews with Washington sources and his intimate knowledge of how that city works or (more often, these days) fails to work."—Michiko Kakutani, New York Times