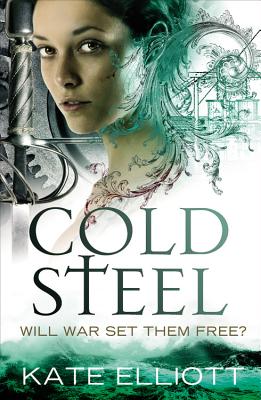 The fantastic conclusion to the Spiritwalker trilogy!


Trouble, treachery, and magic just won't stop plaguing Cat Barahal. The Master of the Wild Hunt has stolen her husband Andevai. The ruler of the Taino kingdom blames her for his mother's murder. The infamous General Camjiata insists she join his army to help defeat the cold mages who rule Europa. An enraged fire mage wants to kill her. And Cat, her cousin Bee, and her half-brother Rory, aren't even back in Europa yet, where revolution is burning up the streets.

Revolutions to plot. Enemies to crush. Handsome men to rescue.

Cat and Bee have their work cut out for them.

Kate Elliott is the author of more than a dozen novels, including the Novels of the Jaran and, most recently, the Crossroads fantasy series. King's Dragon, the first novel in the Crown of Stars series, was a Nebula Award finalist; The Golden Key (with Melanie Rawn and Jennifer Roberson) was a World Fantasy Award finalist. Born in Oregon, she lives in Hawaii. Find out more about the author at www.kateelliott.com or on twitter @KateElliottSFF.

"The concept got me shivering. . . .the characters, the mysteries, the background history, the cultural complexity, were all so intriguing I couldn't stop reading."—Elizabeth Moon on Cold Magic

"Elliott pulls out all the stops in this final chapter to a swashbuckling series marked by fascinating world-building, lively characters, and a gripping, thoroughly satisfying story."—Publishers Weekly (Starred Review) on Cold Steel

"Elliott pulls out all the stops in a wildly imaginative narrative that will ring happy bells for fans of Philip Pullman's His Dark Materials trilogy."—Publishers Weekly on Cold Magic

"Elliott has concocted something very special and original here, with elements to tweak sci-fi and fantasy fans of nearly any stripe, from alt history and steampunk aficionados, to lovers of intrigue, romance, and swashbuckling adventure."—New York Journal of Books on Cold Magic

"The most fabulous part of Elliott's series is how perfectly crafted the characters are."—RT Book Reviews (4.5 stars)
or
Not Currently Available for Direct Purchase
Copyright © 2020 American Booksellers Association