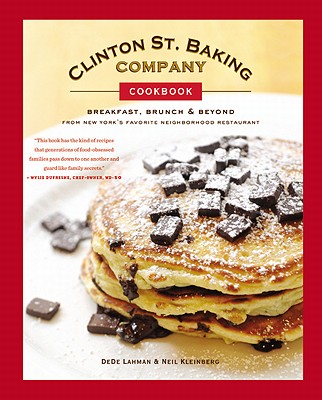 The Clinton St. Baking Company is one of the hottest brunch spots in a city obsessed with brunch. A tiny thirty-two-seat eatery on Manhattan's trendy Lower East Side, the restaurant draws long lines of customers who come from far and wide to sample fresh-baked goods, hearty omelets, sugar-cured bacon, and light-as-air pancakes with maple butter.

In the Clinton St. Baking Company Cookbook, owners DeDe Lahman and Neil Kleinberg share more than 100 treasured recipes that have made their restaurant a sensation. Learn the secret to their house-made buttermilk biscuits and tomato jam, irresistible muffins and scones, delicious soups and sandwiches, and their decadent, eye-catching desserts. Helpful techniques, like Neil's patented omelet "flip and tuck," and gorgeous color photographs throughout will have readers cooking like pros in no time, and sharing the delicious results.

"This book has the kind of recipes that generations of food-obsessed families pass down to each other and guard like family secrets."—Wylie Dufresne, chef/owner, wd-50

Included in "The Best NYC Cookbooks of 2010"
—New York Magazine

"The debut cookbook from New York's brunchiest restaurant celebrates bacon and eggs as an anytime meal, along with the pancakes, French toast and muffins that inspire long weekend lines outside the cultish restaurant." —Time Out New York, "Season's Best Cookbooks"

DeDe Lahman is co-owner of the Clinton St. Baking Company and Community Food & Juice. She began her career as an editor and advice columnist at Seventeen magazine. She has worked as a book researcher, freelance writer, brand consultant, and cook.

Neil Kleinberg was raised in Brooklyn, and opened his first restaurant, Simon's, at the age of 22. After four years at The Water Club under Rick Moonen, he returned to his native Flatbush to reopen the legendary seafood star, Lundy's. Neil co-authored The Lundy's Cookbook (Harper Collins, 1998), and is a distinguished member of The James Beard Foundation.
Loading...
or
Not Currently Available for Direct Purchase