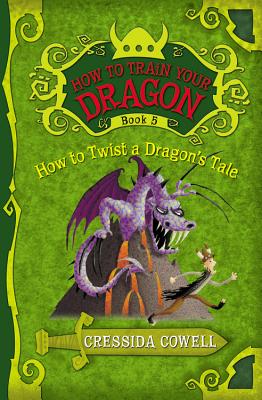 How to Twist a Dragon's Tale

The heat is on for Hiccup! Someone has stolen the Fires-Stone from Volcano Island, which means the Volcano has become active and the tremors are hatching the Eggs of Exterminator Dragons! Can Hiccup return the Fire-Stone to the Volcano, stop it from erupting, and save the Tribes from being wiped out by the terrible sword-claws of the Exterminators?

This fifth adventure in the How to Train Your Dragon series is packed with the action, humor, heart, and remarkable illustrations that have made Cressida Cowell a beloved bestseller around the globe.

Cressida Cowell lives in London with her husband, Simon; children Maisie, Clementine, and Alexander; and two cats, Lily and Baloo. In addition to translating Hiccup's memoirs, she has written and illustrated picture books including Hiccup, the Viking Who Was Seasick, Little Bo Peep's Library Book, and That Rabbit Belongs to Emily Brown. Her website is www.cressidacowell.co.uk.
Loading...
or support indie stores by buying on