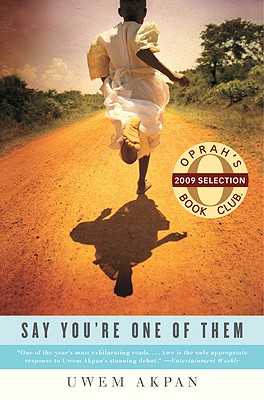 An Oprah's Book Club selection: this "electrifying" book (Washington Post) pays tribute to the wisdom and resilience of children even in the face of the most agonizing circumstances.

Uwem Akpan's stunning stories humanize the perils of poverty and violence so piercingly that few readers will feel they've ever encountered Africa so immediately. The eight-year-old narrator of "An Ex-Mas Feast" needs only enough money to buy books and pay fees in order to attend school. Even when his twelve-year-old sister takes to the streets to raise these meager funds, his dream can't be granted. Food comes first. His family lives in a street shanty in Nairobi, Kenya, but their way of both loving and taking advantage of each other strikes a universal chord.

Akpan's voice is a literary miracle, rendering lives of almost unimaginable deprivation and terror into stories that are nothing short of transcendent.

"[A] startling debut collection... Akpan is not striving for surreal effects. He is summoning miseries that are real.... He fuses a knowledge of African poverty and strife with a conspicuously literary approach to storytelling filtering tales of horror through the wide eyes of the young."—Janet Maslin, New York Times

"Akpan wants you to see and feel Africa, its glory and its pain. And you do, which makes this an extraordinary book."—Vince Passaro, O Magazine

"Uwem Akpan, a Nigerian Jesuit priest, has said he was inspired to write by the 'humor and endurance of the poor,' and his debut story collection...about the gritty lives of African children--speaks to the fearsome, illuminating truth of that impulse."—Lisa Shea, Elle

"Nigerian-born Jesuit priest Akpan transports the reader into gritty scenes of chaos and fear in his rich debut collection... Akpan's prose is beautiful and his stories are insightful and revealing, made even more harrowing because all the horror-and there is much-is seen through the eyes of children."—Publishers Weekly

"African writer and Jesuit priest Uwem Akpan depicts the plight of African children with the kind of restraint only possible when an author fully inhabits his characters-he manages to be empathetic without being condescending."—The Village Voice

"From the bowels of the most impoverished, war-ravaged continent comes this strong, brave offering from Uwem Akpan, a Jesuit priest. What better lens to view this landscape than through the eyes of children--siblings about to be sold into slavery by their uncle, a Muslim boy trying to pass as a Christian on a bus traversing a religious war. No news report or documentary evokes the desperate straits of the African people so keenly. Like Isaac Babel's Red Calvary stories and Michael Herr's Dispatches, Say You're One of Them has invented a new language-both for horror and the relentless persistence of light in war-torn countries. I can't shake this book, and shouldn't."—Mary Karr, author of The Liars' Club

"Say You're One of Them is a beautiful, bitter, compelling read. The savagely strange juxtapositions in these stories are grounded by the loving relationships between brothers and sisters forced to survive in a world of dreamlike horror. Open the book at any page, as in divination, and a stunning sentence will leap out. Newspaper facts are molded by Akpan's sure touch into fictional works of great power."—Louise Erdrich, author of Love Medicine and The Plague of Doves

"Say You're One of Them is one of those collections that drops the reader into the midst of wonderfully rendered worlds, and compellingly so. I hope it finds the wide readership it merits."—Oscar Hijuelos, author of The Mambo Kings Play Songs of Love

"Say You're One of Them is astonishing, triumphantly unique. The stories flow with an eerie Chekhovian ease and understatement-the horrors are evoked with a matter-of-factness that is devastating, and the characters' memories and inner lives are always more real than the appalling events occurring around them. Uwem Akpan has moral greatness--you can never again put out of your mind what he has taken you firmly by the hand to get a close look at. The startling newness of his language gives us no choice but to listen."—Franz Wright, author of Walking to Martha's Vineyard, winner of the 2004 Pulitzer Prize for Poetry

"Uwem Akpan's stories are extraordinary not just for the sheer power of their narratives and the sympathy and affection he lavishes on his child protagonists, but also for their importance in communicating the chaotic, strife-ridden world of Africa today. What an original, graceful, and necessary talent Akpan is!" —Ron Hansen, author of Mariette in Ecstasy

"Uwem Akpan writes with a political fierceness and a humanity so full of compassion it might just change the world. His is a burning talent."—Chris Abani, author of GraceLand and The Virgin of Flames

"Say You're One of Them is not only good advice for surviving ethnic conflict; it's also, in Uwem Akpan's hands, an exercise in empathetic speculation--an exercise that, in this collection's case, seems nearly sacramental in the sobriety and miraculousness of its reach. Repeatedly these stories quietly enable us to imagine the unimaginable, and offer up to our view the unspeakable rendered with clarity and grace."—Jim Shepard, author of Like You'd Understand, Anyway, National Book Award Finalist, 2007, and winner of the Story Prize, 2008

"Say You're One of Them gives voice to Africa's children in beautifully crafted prose and stunning detail. Uwem Akpan is a major new literary talent." —Peter Godwin, author of When a Crocodile Eats the Sun

"Here is a truly unforgettable book. Say You're One of Them is an important, well-crafted, and ultimately devastating collection, and Akpan is a writer of rare gifts and deeply humane vision. I can't recommend these stories more highly."—Peter Orner, author of The Second Coming of Mavala Shikongo

"Akpan has the largeness of soul to make his vision of the terrible transcendent. Beside [his stories], other fiction seems to dry up and blow away like dust."—Craig Seligman, Bloomberg News

"With this heart-stopping collection, which includes the New Yorker piece, "An Ex-Mas Feast," that marked Akpan as a breakout talent, the Nigerian-born Jesuit priest relentlessly personalizes the unstable social conditions of sub-Saharan Africa.... The stories are lifted above consciousness-raising shockers by Akpan's sure characterizations, understated details, and culturally specific dialect."—Jennifer Mattson, Booklist

"All five of these stories are electrifying."—Maureen Corrigan, NPR's "Fresh Air"

"...a tour de force that takes readers into the lives glimpsed in passing on the evening news...These are stories that could have been mired in sentimentality. But the spare, straightforward language--there are few overtly expressed emotions, few adjectives--keeps the narratives moving, unencumbered and the pages turning to the end."—Associated Press

"Akpan combines the strengths of both fiction and journalism--the dramatic potential of the one and the urgency of the other--to create a work of immense power...He is a gifted storyteller capable of bringing to life myriad characters and points of view...the result is admirable, artistically as well as morally."—Adelle Waldman, Christian Science Monitor

"It is not merely the subject that makes Akpan's...writing so astonishing, translucent, and horrifying all at once; it is his talent with metaphor and imagery, his immersion into character and place....Uwem Akpan has given these children their voices, and for the compassion and art in his stories I am grateful and changed."—Susan Straight, Washington Post Book World (front page review)

"Searing...In the end, the most enduring image of these disturbing, beautiful and hopeful stories is that of slipping away. Children disappear into the anonymous blur of the big city or into the darkness of the all-encompassing bush. One can only hope that they survive to live another day and tell another tale."—June Sawyers, San Francisco Chronicle

"These stories are complex, full of respect for the characters facing depravity, free of sensationalizing or glib judgments. They are dispatches from a journey, Akpan makes clear, which has only begun. It is to their credit that grim as they are-you cannot but hope these tales have a sequel."—John Freeman, Cleveland Plain-Dealer

"An important literary debut.... The reader discovers that no hiding place is good enough with these stories battering at your mind and heart."—Alan Cheuse, Chicago Tribune

Say You're One of Them won the Commonwealth Writers' Prize for Best First Book (Africa Region) 2009 and PEN/Beyond Margins Award 2009, and was a finalist for the Los Angeles Times Art Seidenbaum Award for First Fiction. In 2007, Akpan taught at a Jesuit college in Harare, Zimbabwe. Now he serves at Christ the King Church, Ilasamaja-Lagos, Nigeria.