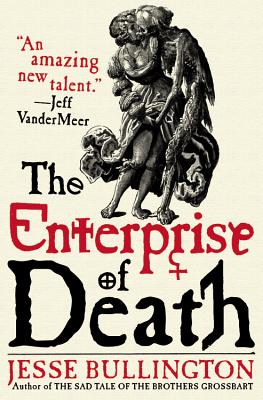 The Enterprise of Death

As the witch-pyres of the Spanish Inquisition blanket Renaissance Europe in a moral haze, a young African slave finds herself the unwilling apprentice of an ancient necromancer. Unfortunately, quitting his company proves even more hazardous than remaining his pupil when she is afflicted with a terrible curse. Yet salvation may lie in a mysterious tome her tutor has hidden somewhere on the war-torn continent.

She sets out on a seemingly impossible journey to find the book, never suspecting her fate is tied to three strangers: the artist Niklaus Manuel Deutsch, the alchemist Dr. Paracelsus, and a gun-slinging Dutch mercenary. As Manuel paints her macabre story on canvas, plank, and church wall, the young apprentice becomes increasingly aware that death might be the least of her concerns.

Jesse Bullington spent the bulk of his formative years in rural Pennsylvania, the Netherlands, and Tallahassee, Florida. He is a folklore and outdoor enthusiast who holds a bachelor's degree in History and English Literature from Florida State University. He currently resides in Colorado, and his blog, as well as fan art, news and exclusive content can be found at www.jessebullington.com.
Loading...
or support indie stores by buying on
(This book is on backorder)