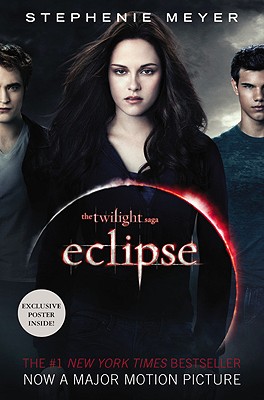 With 160 million copies of the Twilight Saga sold worldwide, this addictive love story between a teenage girl and a vampire redefined romance for a generation. The love triangle heats up in book three.

As Seattle is ravaged by a string of mysterious killings and a malicious vampire continues her quest for revenge, Bella once again finds herself surrounded by danger. In the midst of it all, she is forced to choose between her love for Edward and her friendship with Jacob-knowing that her decision has the potential to ignite the ageless struggle between vampire and werewolf.

With her graduation quickly approaching, Bella has one more decision to make: life or death. But which is which?

"People do not want to just read Meyer's books; they want to climb inside them and live there."--Time

Praise For Eclipse (The Twilight Saga #3)…

"Has a hypnotic quality that puts the reader right inside the dense, rainy thickets of [Forks]" - People Magazine

"Meyer's trilogy seethes with the archetypal tumult of star-crossed passions, in which the supernatural element serves as a heady spice." - The New York Times

Stephenie Meyer is the author of the #1 bestselling Twilight Saga, The Host, and The Chemist. Twilight has enraptured millions of readers since its publication in 2005 and has become a modern classic, redefining genres within young adult literature and inspiring a phenomenon that has had readers yearning for more. The series has sold 160 million copies worldwide and was made into five blockbuster feature films. Stephenie lives in Arizona with her husband. Her website is stepheniemeyer.com.
Loading...
or
Not Currently Available for Direct Purchase